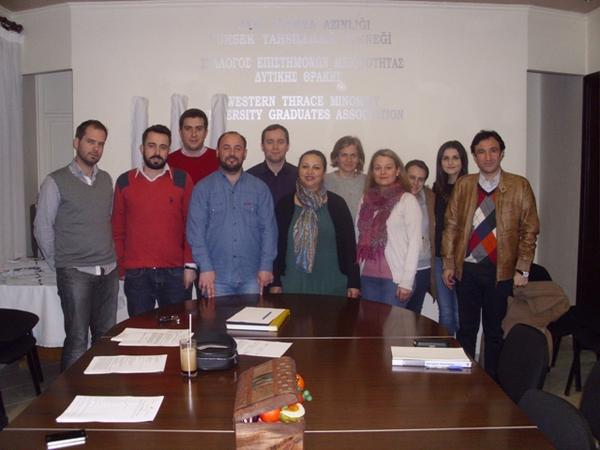 The Western Thrace Minority University Graduates Association (WTMUGA) was established in 1982. WTMUGA's main working areas are: Social, cultural and educational development of the Turkish Minority of Western Thrace, representation of the minority in the international platform, combating racism and Xenophobia, monitoring and reporting human and minority rights violations of the region. WTMUGA is a member of FUEN since 2007.

Western Thrace is located in the province of East Macedonia and Thrace in Northern Greece. Like other Turkish communities in other parts of the southern Balkans that experienced centuries of Ottoman rule Western Thrace Turks are indigenous to the region.  As a result of the Balkan wars in 19th century the region belonged to Bulgaria. However, a new era for Western Thrace Turks followed by the Lausanne Treaty of 1923 when the region came under  Greek rule. Regardless continuing political and administrative changes in the region, the local population of Western Thrace has always been regarded as an ethnic minority. Currently Turkish Muslims living in Western Thrace are the only group in Greece with a minority status. According to the official data of Greece, Western Thrace Turks are estimated at 49000 comprising half of the total Muslim population of the region of 98.000. Unofficial data though suggests a higher number of the Turkish population  130,000 and 150,000 according to the socio-cultural organizations in Western Thrace.
The Lausanne Treaty of 1923 brought a definition of minority defined not on ethnic, but religious grounds. Such provision manifestly contradicts the contemporary interpretation of self-identity and makes it impossible for a historic minority to be identified as the Turkish  historic minority at the official level. One of the consequences accumulated over many years is the aggravation of important issues such as education in the mother tongue. Mother tongue education for Western Thrace Turks is available only at primary school level that shows how limited opportunities the historic minority has at disposal. Despite the fact that Greece is a full member of the European Union, there is an evident discrimination against the young generation of Turkish origin regarded and treated as second-class citizens.
Another problem for Western Thrace Turks remains the question of citizenship in reference to Article 19 of the Law on Citizenship of 1955 that was in force until 1998. The legislation granted citizenship only to ethnic Greeks that was a blatant manifestation of violating the fundamentals of human rights. The local Turkish population of Western Thrace were deprived of the Greek citizenship and forced to move elsewhere. Despite the repeal of the law in 1998 no compensation has been provided. An acute problem arises in religious freedom. The Turkish minority is deprived of the right to choose their own mufti, as a representative of their religious denomination. Muftis are appointed by governmental officials of Greece.   In addition, there is a 3% electoral threshold, which does not allow a national minority to participate in political activities of the country, to nominate and elect their deputies to the Greek Parliament.