Congress opening: FUEN’s work is much needed in hard times like this

The war in Ukraine and the regress in the protection of minority rights in Europe was on everyone’s mind at the opening ceremony of the FUEN Congress 2022, held on Thursday, 29 September at the Representation of state Brandenburg in Berlin, Germany. 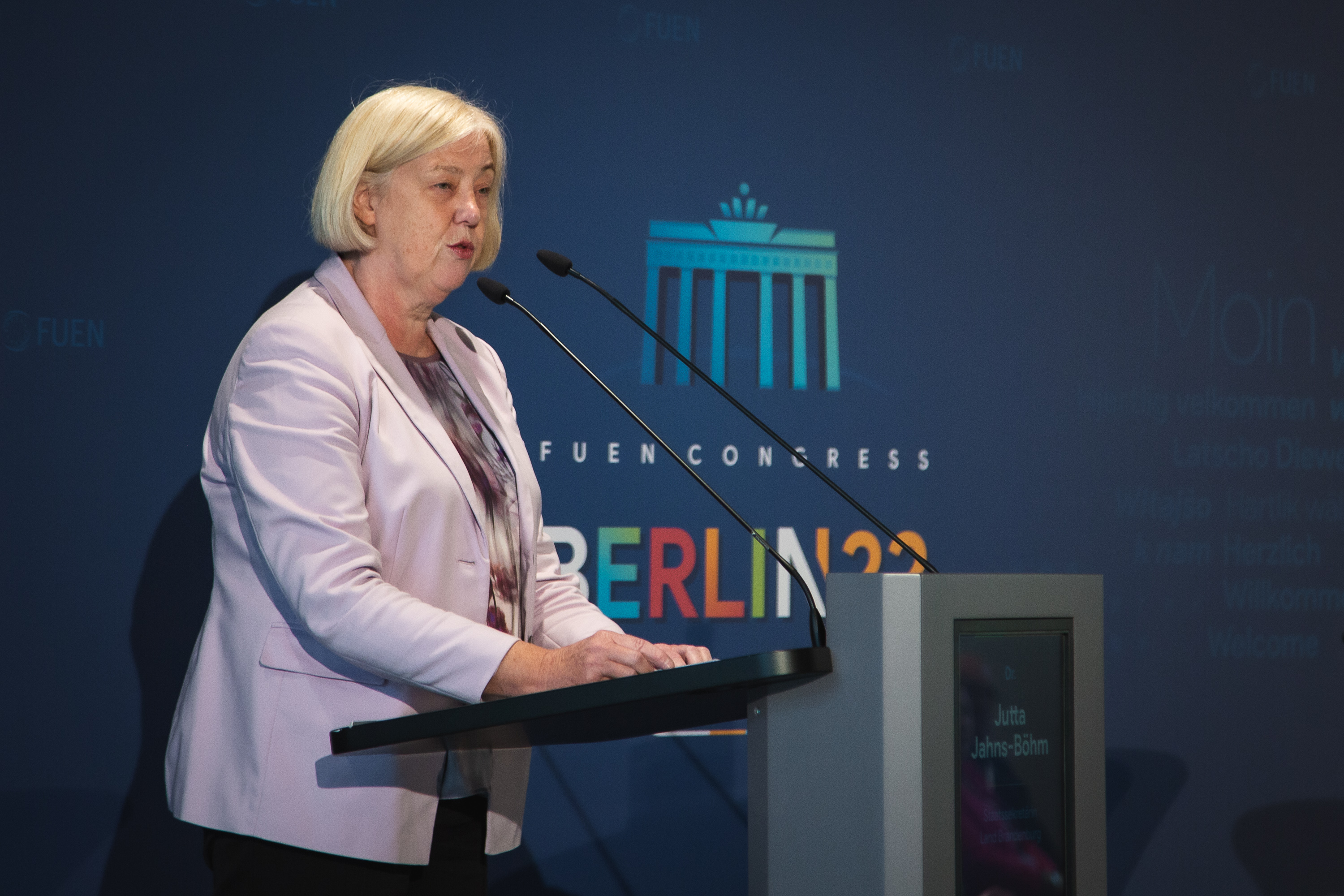 Dr. Jutta Jahns-Böhm, State Secretary of the State of Brandenburg welcomed the participants, carrying the greetings of Ministerpresident Dietmar Woidke, who „knows and appreciates the work of FUEN”. She praised FUEN’s hard work for the rights of minorities, including the Lusatian Sorbs in Brandenburg, saying that everybody had to profit from it. Unfortunately, the situation is not as good in other places as it is in Brandenburg, she pointed out, adding that in the current situation with the war, the climate change and the energy crises, it is vital for minorities to maintain their identity, culture and language. „This is why your work is so important, as FUEN can build and have been building bridges for a very long time between communities, organisations, countries, minorities and majorities”, she said. 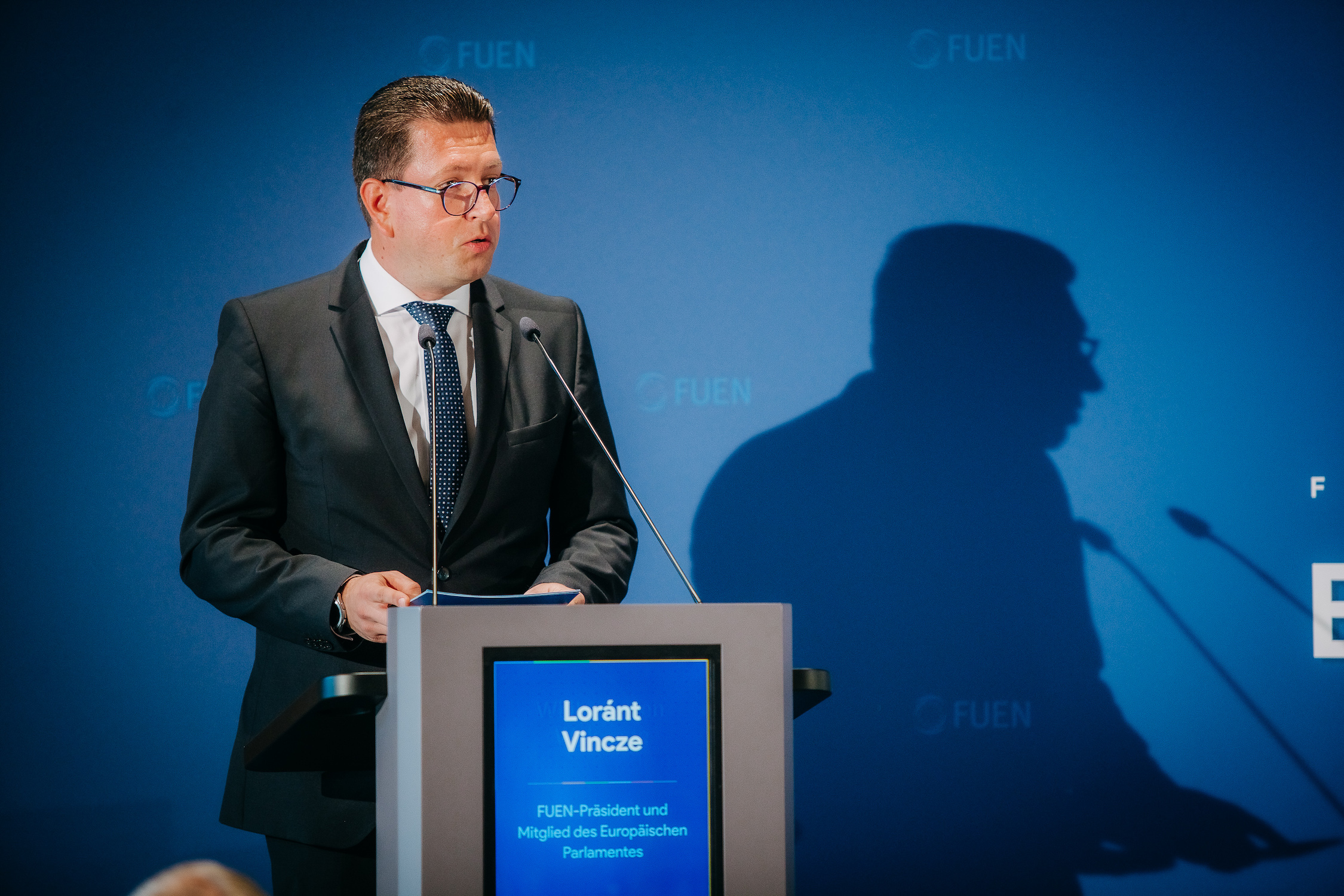 FUEN President MEP Loránt Vincze said that despite the excellent atmosphere of Berlin, there are more reasons to be pessimistic because of the senseless war launched by Russia against Ukraine: thousands of people have died, tens of thousands have been wounded, and millions have left their homes for other parts of Ukraine or fled abroad – among them members of Ukraine's numerous national minorities, many of them from FUEN member organisations, said the President. He added that sadly, the end of the war is not in sight and there is very little we can do beyond the gestures of solidarity and assistance. „This is the time of solidarity and support with the people of Ukraine. But we also need to say: after the war is over, settling the relationships with the minority groups has to become a main objective for Ukraine. There are already positive developments in this regard, as the leaders of Ukraine have already made a commitment in this regard. I cannot envision any international agreement which does not secure the rights of minorities, including mother tongue education and language use”, he said, adding that another reason to be pessimistic is that the situation of minorities has not improved elsewhere.

„It’s not favours that minority communities need, but opportunities: recognition, legislative frameworks, public education in mother tongue, their own education, and cultural institutions. (…) It would be good to live in societies in which minority communities are equal partners of the majority, in which the minority language enjoys the same respect as the majority language, in which the majority looks after the minority. We know that in most of our countries this is still utopistic, but we cannot give the fight up”, said the FUEN President. 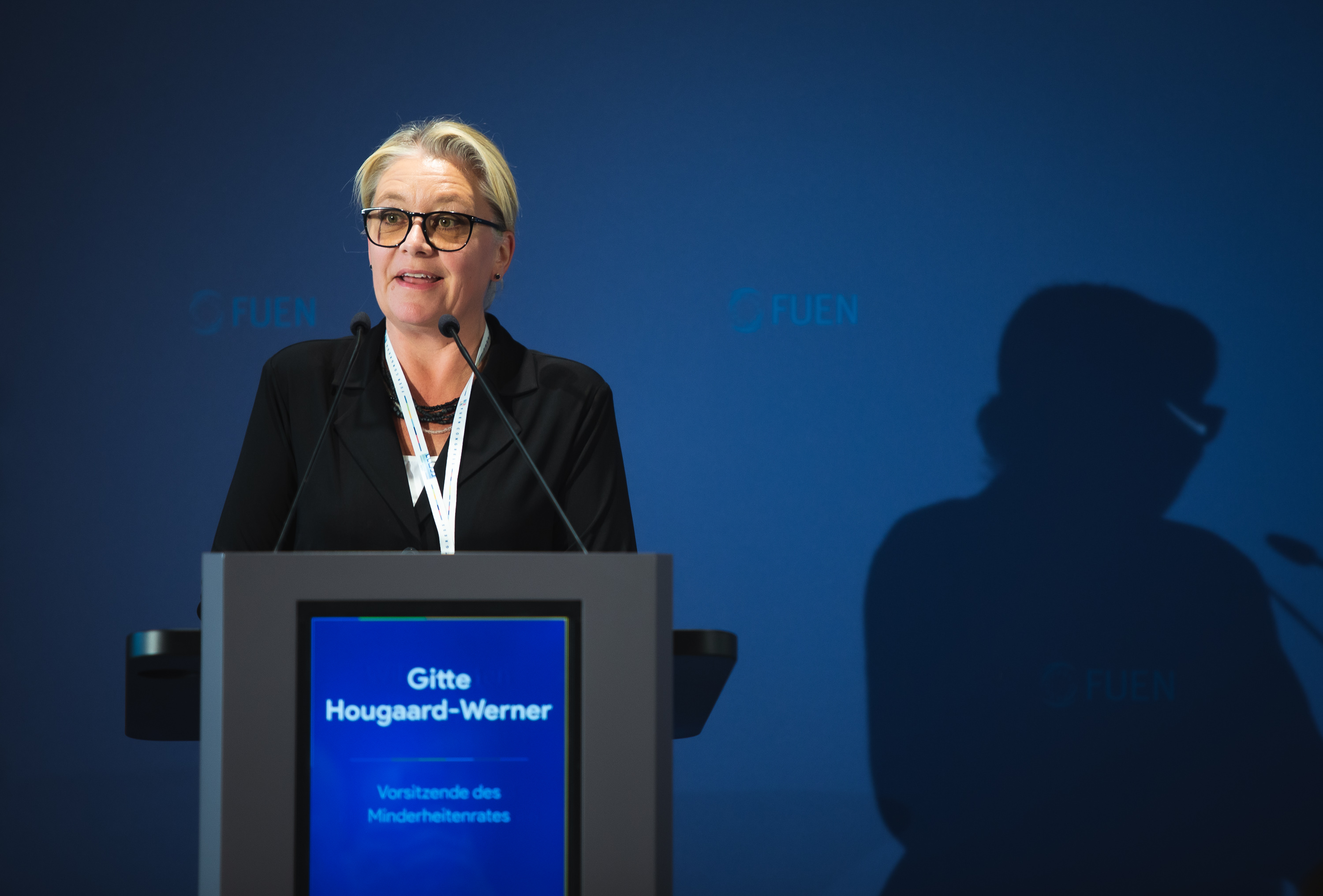 Gitte Hougaard-Werner, Chair of the Minority Council greeted the participants on behalf of the institution and the four autochthonous minorities in Germany they represent – the Danes, the Sorbs, the Frisians and the German Sinti and Roma. According to her, minorities are in a good situation in Germany, especially considering the current situation in Europe. She pointed out the four minorities’ criticism oo the attack of Russia and the instrumentalization of the Russian minority in Ukraine. „We all know what minorities have to fight for, and it is good that we can have this congress here and send a strong signal”, she concluded. 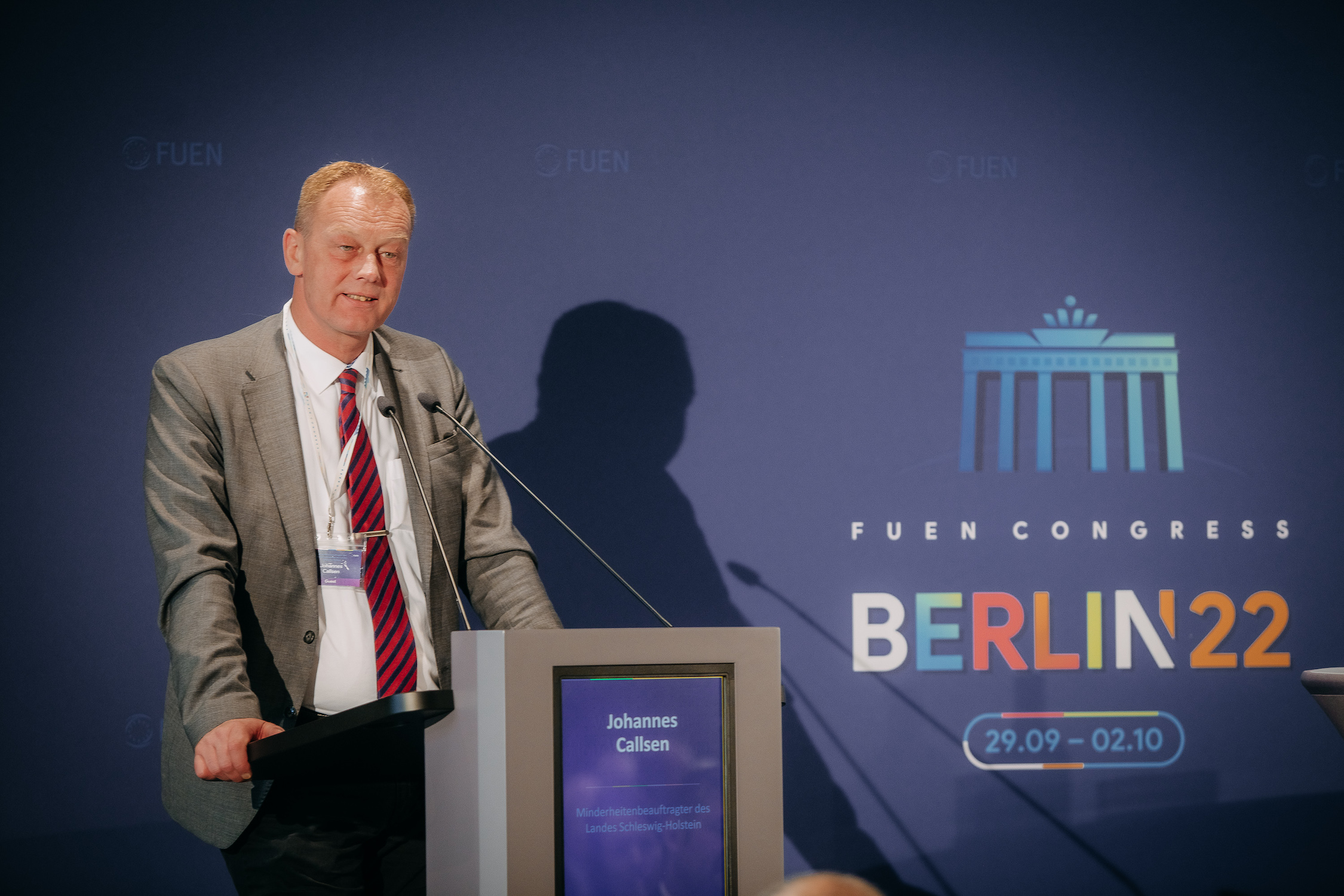 Johannes Callsen, Minority Commissioner of the State Schleswig-Holstein brought Ministerpresident Daniel Günther’s greetings and said that these are restless times in Europe, and common understanding and common values are very important now. He also talked about Schleswig-Holstein’s ongoing support for FUEN, which has its headquarters in Flensburg, their support for the Minority SafePack Initiative, but also about the Minority Competence Network, in which FUEN is an important partner. 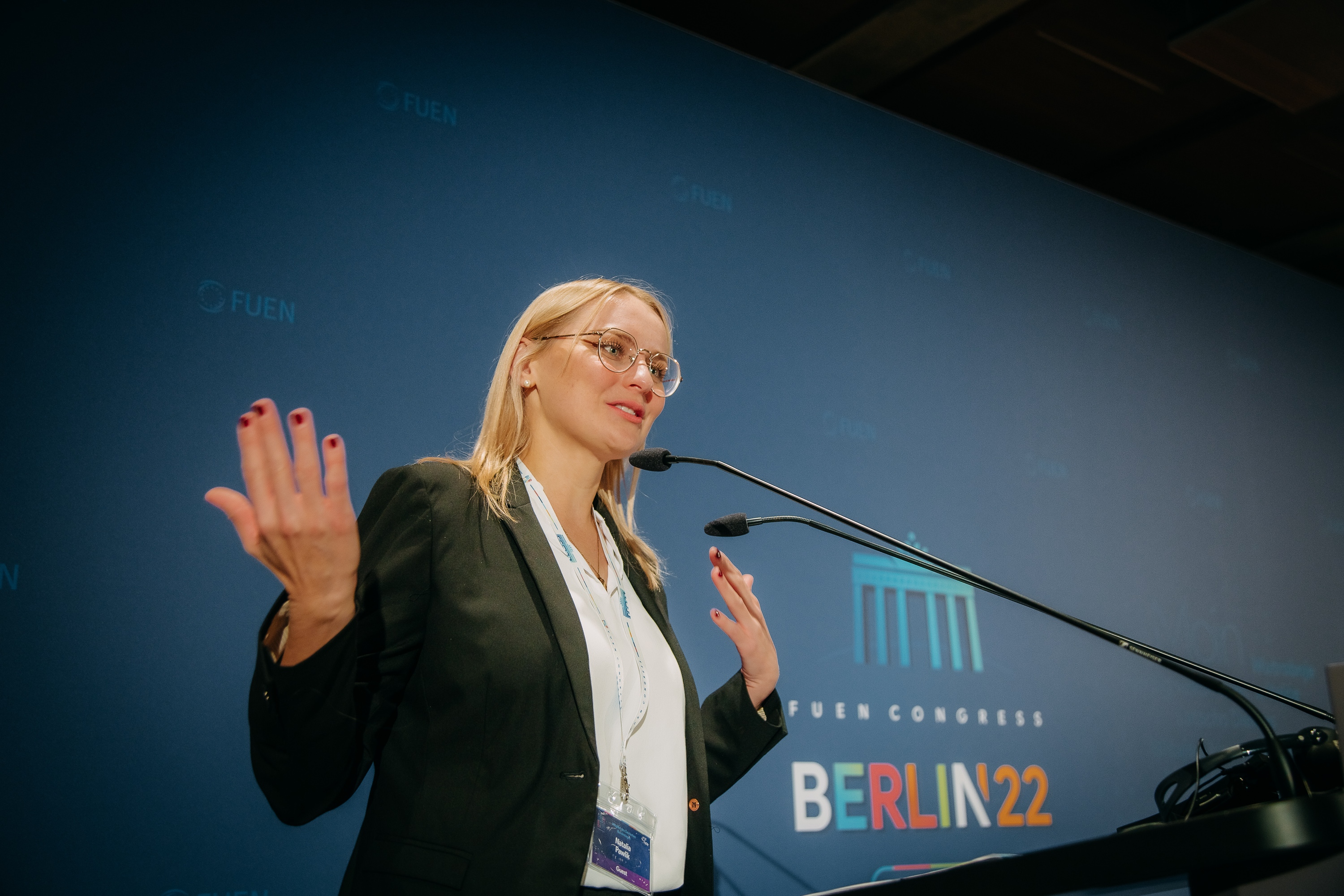 "Minority policy is peace policy - I am convinced of that," finally emphasised Natalie Pawlik, Federal Government Commissioner for Repatriate Issues and National Minorities since April this year. She herself is a descendant of so-called Volga Germans and came to Germany from Siberia in 1999. "I know from my own experience that good minority policies lead to social wealth," she emphasised and praised the efforts of FUEN in Europe and especially the Minority SafePack Initiative as an important signal. "I want to do everything I can to make this initiative a success on the European level – you have me on your side for your causes."

After the opening speeches, it was directly about the concrete minority policy in Germany: At the "BundesTalks", members of the German Bundestag gave insights into their work. In your opinion, what are the biggest challenges in Germany?, moderator Gitte Hougaard-Werner, Chair of the Minorities Council, wanted to know from Stefan Seidler. The SSW politician (Südschleswigscher Wählerverband) and himself a member of the Danish minority in Germany has been a factionless member of the Bundestag for a year and campaigns for minority rights there. "We have to strengthen the framework conditions in our homeland, keep young people in the regions by improving educational conditions – also in minority languages," is his answer. He said that the project-based, often temporary support of minorities should be made permanent, and that this was another area that needed to be worked on in Germany. 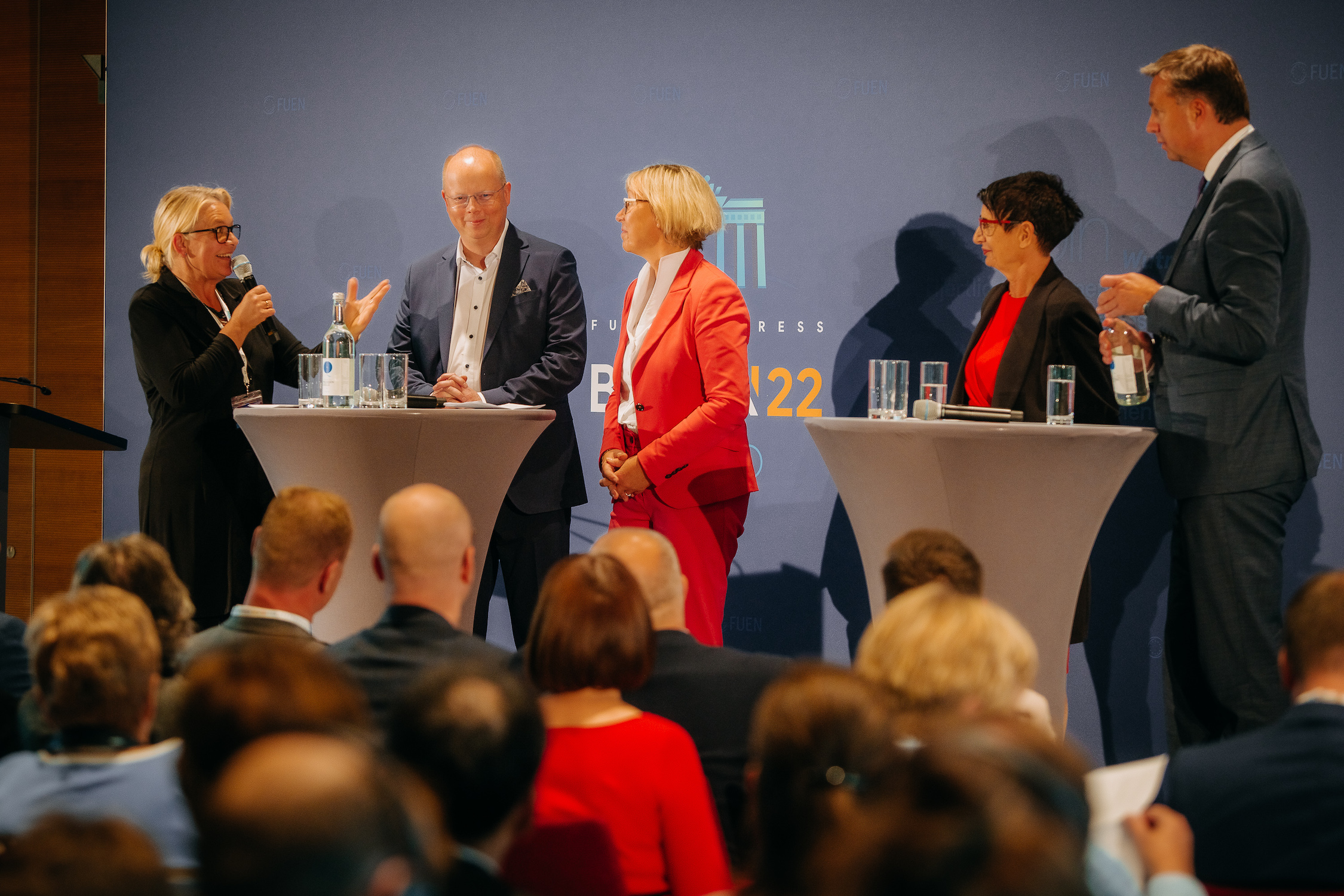 "It needs MPs like us who are passionate about minorities, so that is the best-kept secret revealed, once and for all, " said Petra Nicolaisen, Member of the German Bundestag (CDU). As she comes from Schleswig-Holstein, where minority protection is even regulated in the state constitution, she, unlike many other Bundestag politicians, has a feel for these issues and also campaigned for the Minority SafePack Initiative.

The topic of the cutback in language instruction for the German minority in Poland, which has been making waves since this year, also came up in this round – after all, the Polish state is thus exerting direct pressure on the German government with the demand that more mother-tongue instruction be made possible for Polish children in Germany as well.

The SPD Member of Parliament Simona Koß explained that the clarification of the situation on the German side is so complex because education is a matter for the federal states there – an examination of the teaching situation of Polish pupils is currently underway. "We want to support the German minority in Poland in any case in order to do peace work," she made clear.

Lire plus
"A great role model": FUEN Prize 2022 goes to Gianclaudio Bressa Dialogues, conflicts and wars – minorities in the field of tension