Berlin – On Friday, 27 November the German Bundestag unanimously adopted a resolution in support of the Minority SafePack Initiative (MSPI). The motion for the resolution entitled “Call on the European Commission to implement the Citizens' Initiative "Minority SafePack” (MSPI)” was introduced by the parliamentary groups CDU/CSU and SPD.

Loránt Vincze, President of FUEN and Member of the European Parliament welcomed the decision: “The unanimous adoption of the resolution by the German Bundestag, the Parliament of the largest EU Member State, sends a strong signal to the European Commission to adopt a package of legislative acts to protect national minorities at EU level. It recognizes the need for protection of 50 million Europeans belonging to national minorities and language groups”.

Sylvia Lehmann, SPD: “With the Resolution, the German Bundestag underlines that respecting and promoting European cultural and linguistic diversity and the effective protection of the rights and promotion of national minorities and their equal participation in society is a permanent and important duty of the European Union”.

At the debate three MPs from the CDU spoke: Astrid Damerow, Eckhardt Pols and Petra Nicolaisen. Petra Nicolaisen, CDU/CSU: "Minorities are bridge builders. They make an important contribution to mutual understanding and peace in Europe. But they can only be bridge-builders if their rights are recognised and enforced and if their protection and promotion is guaranteed in the individual states. "

Filiz Polat, Bündnis 90/Die Grünen: "We, the Bündnis 90/Die Grünen group, congratulate you on presenting the European Minority SafePack Initiative, one of the most successful citizens' initiatives in the European Union. There is indeed a lack of an effective, verifiable and sanctionable protection mechanism for minorities at European Union level. We want to close this gap, and we want to send a powerful signal to the European Commission. Minority protection must become the common goal of all Europeans".

Simone Barrientos, Die Linke: "National minorities in Germany and in the EU must be respected and supported and there must be no differences in support. There must not be any two-class minorities, there must not be fewer or more rights or better or undesirable minorities and so on. That cannot be allowed."

Sandra Bubendorfer-Licht, FDP: "All Europeans should have the opportunity to define where the future of Europe is headed. A future in which not only major languages dominate, but also the needs of minorities are taken into account. This will preserve cultural identity."

The document states that unfortunately, the promotion and protection of minorities in Europe is not a matter of course. “It is therefore appropriate and necessary for the German Bundestag and the Federal Government to support a first comprehensive anchoring of rights for the protection and strengthening of national minorities at European Union level,” says the resolution. It points out that the Framework Convention for the Protection of National Minorities and the European Charter for Regional or Minority Languages, developed within the Council of Europe, have not been signed and ratified by all member states of the European Union. It also notes the dangers of double standards of the Copenhagen Treaty: while very high standards for the protection of minorities were set in the course of the pre-accession process, after the successful accession there is no binding legal framework for member states to maintain these standards or – in the case of the "older" states – to achieve these standards at all. 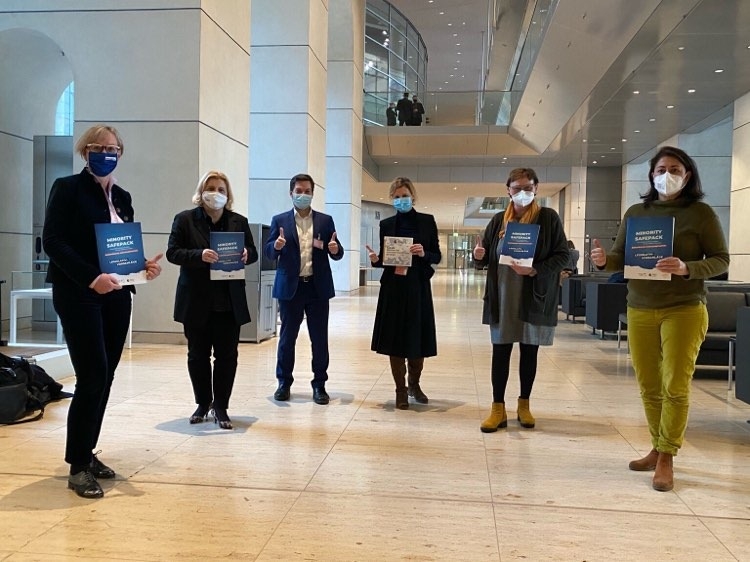 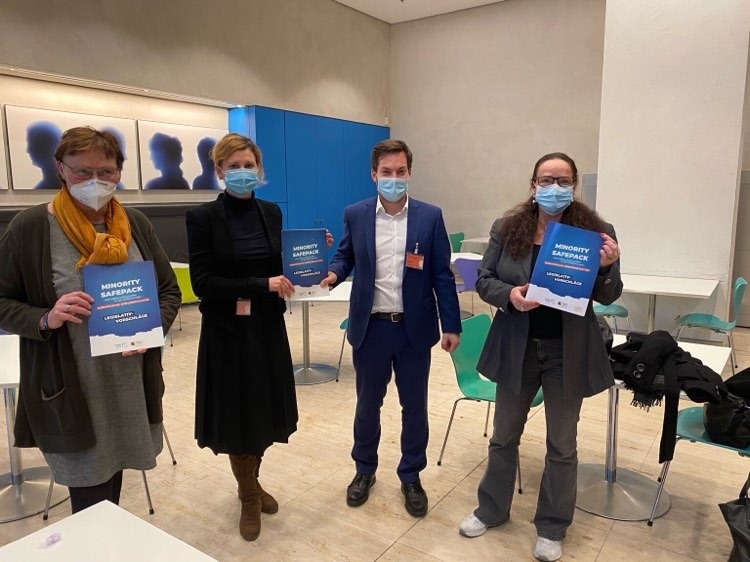 Pictured: FUEN's delegations with Members of the Bundestag after the parliamentary debate

The European Citizens' Initiative - "Minority SafePack" - coordinated by the Federal Union of European Nationalities (FUEN) contains a comprehensive set of measures to protect and promote the cultural and linguistic diversity of autochthonous national minorities in a sustainable way. The initiative collected 1,123,422 signatures within one year, which were submitted by the MSPI Citizen´s Committee to the new European Commission on 10 January 2020. On 15 October 2020, they presented their proposals at a hearing held in the European Parliament. The hearing was a success as an overwhelming majority of MEPs expressed their support for the demands of the MSPI. A supportive parliamentary resolution is currently being drafted in the European Parliament and is expected to be adopted on 14 December 2020.

The European Commission is required to present its legal and political conclusions on the initiative and its follow-up by 15 January 2021 at the latest.