With the FUEN BundesTalks, FUEN offers a series of campaign debates with candidates running in the upcoming Bundestag elections on 26 September 2021 to make the concerns of minorities visible in the election campaign as well as to support minority members in their election decision. Likewise, the FUEN BundesTalks are to contribute to raising the awareness of the majority population to the concerns and issues of national minorities in Germany in the context of the election campaign.

In the first debate of the FUEN BundesTalks on 9 June 2021, five candidates for the Bundestag from Schleswig-Holstein discussed their parties' minority policy plans for the coming legislative period. Ms Petra Nicolaisen, Member of the Bundestag (CDU), Mr Sönke Rix, Member of the Bundestag (SPD), Ms Katrine Hoop, (Die Linke), Ms Marlene Langholz-Kaiser, (Bündnis 90/ die Grünen) and Mr Stefan Seidler (leading candidate SSW), who was connected online, accepted the invitation. The event, which took place in the Schleswig-Holstein Representation in Berlin, was moderated by FUEN Vice-President Angelika Mlinar and Gösta Nissen, Head of the Minority Secretariat of the four autochthonous national minorities in Germany. 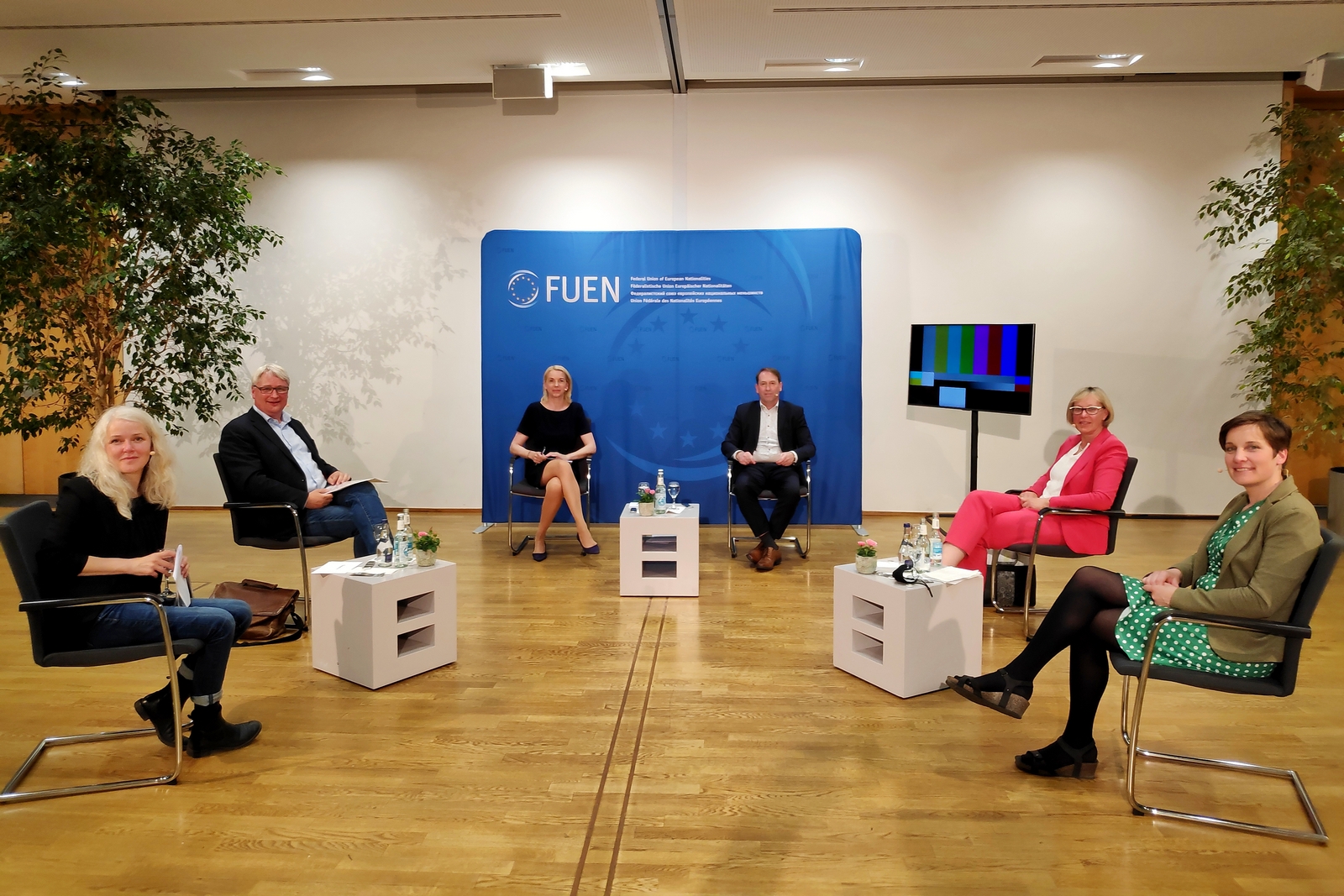 In general, it emerged from the debate with politicians from the CDU, SPD, Die Linke, Bündnis 90/ Die Grüne and SSW that the autochthonous minorities will play an important role in all election programmes. At the same time, however, they see a challenge in raising awareness of minority issues at the federal level. The special position of the SSW, which is running in the Bundestag elections for the first time in over 60 years and with which a minority party could enter the Bundestag for the first time, became clear in this context.

The initiative to include the protection of minorities in the Grundgesetz, which Schleswig-Holstein, Brandenburg and Saxony have introduced in the Bundestag, was welcomed by the participating politicians. All of them pointed to the responsibility of the federal government to take care of the concerns of the autochthonous minorities and to stand up for them, as this is not only the task of the individual German states in which minorities live, but a task for the society as a whole.

A controversy emerged in the debate regarding the demand for a collective right of action for the umbrella organisations of the national minorities and ethnic groups in Germany. Ms. Nicolaisen from the CDU emphasised that the legal system is based on the protection of individual rights and that her party is therefore critical of this demand. Ms Marlene Langholz-Kaiser of the Green Party then gave the example of bilingual place name signs, which has an effect on the general visibility of minorities. In this case, the individual would have little success with a complaint, as this problem does not directly affect the individual. The candidates from SSW, SPD and Die Linke agreed with her and emphasised the importance of the collective in this context.

They all welcomed the amendment of the NDR State Treaty, which, based on an initiative from Schleswig-Holstein, now also includes a clause providing the appropriate and regular consideration of regional and minority languages in the NDR's programming. At the same time, it became clear that they fully support the demand for representation of national minorities in the NDR Broadcasting Council, as is the case in ZDF.

When asked about the future of the Minority SafePack Intiative, there was again unanimity among the participating politicians. All of them expressed their disappointment regarding the European Commission's refusal to adopt legislative proposals based on the points of the MSPI, as the initiative is an important instrument at EU level for securing the protection of minorities. They assured their support in further communication with the EU.

In this context, Marlene Langholz-Kaiser emphasised that the Greens are 100% behind the MSPI and support the complaint against the Commission. She would have wished for even more commitment from the Federal Government. Ms Langholz-Kaiser also stated that the MSPI should be included in the election programme of the Greens.

Petra Nicolaisen (CDU) suggested that Germany should send a note of protest to the EU Commission, asking it to consider the concerns of the MSPI nonetheless. The next Bundestag should take up the MSPI again as soon as the ruling of the European Court of Justice is available.

Sönke Rix (SPD) emphasised that for him the most important question is why the MSPI is so important in the first place. He believes that whoever is a member of the EU must also deal properly with its minorities. Moreover, Rix hopes that the next Bundestag will deal with the MSPI even more intensively.

Katrine Hoop (Die Linke) stressed that this issue could not only be clarified on a national level but also on a European level and that the MSPI had an important role to play in underlining the added value of the initiative for Europe in terms of freedom and education policy. The MSPI is also included in the Left Party's draft election programme and, according to Hoop, will also be supported by the party.

You can watch the first edition of the FUEN BundesTalks on the FUEN Youtube Channel.

The autochthonous minorities hardly play a role in the public discourse on social diversity. The same applies to the election campaign and the reporting in the run-up to the 2021 Bundestag elections. For this reason, the Federal Union of European Nationalities (FUEN) organises the FUEN BundesTalks on various minority policy issues. We will discuss with candidates for the Bundestag from various parties about the design and goals of federal policy in the area of national minorities. The FUEN BundesTalks are intended to support members of national minorities in their election decisions.