It was a celebration for us: 30 years of AGDM

Intensive working sessions, lively exchange and a festive evening programme: the annual conference of the Association of German Minorities (AGDM) from 4 to 7 November in Northern Schleswig, the home of the German minority in Denmark, was a complete success.

During the last ten years, the meetings have mostly taken place in Berlin, so the on-site visit to Northern Schleswig provided a new setting that gave all participants welcome insights into the real life of the minority there - with visits to a rowing club, the German high school in Apenrade, the German Museum in Sonderburg as well as the celebrations of the "German Day", which is celebrated annually in Tingleff at the beginning of November. In this context, Daniel Günther, Minister-President of Schleswig-Holstein, emphasised in his speech the necessity of anchoring minority rights at the European level. The coexistence in the German-Danish borderland is "not a self-evident fact in Europe". "That is why we will continue to push for Europe to take responsibility for minorities and support the Minority SafePack Initiative, which has been signed by a million people".

An important topic of the meeting was the formation of a government in Germany and the future design of political lobbying in order to be visible as early as possible in the coalition agreement. In addition, future projects and the respective situations of the minorities on the ground were discussed. The meeting also provided many moments for personal and substantive exchange, something that had recently been sorely missed by participants. The AGDM community also looked at plans for the coming year - in the hope that face-to-face meetings will once again become easier. A total of about 20 participants from eight European countries took part.

At the end of the conference, things got really festive: the AGDM invited everyone to a big anniversary celebration on Knivsberg, the cultural centre of the German minority in Northern Schleswig. The AGDM was founded 30 years ago under the umbrella of FUEN, making it the oldest working group in the FUEN family. Today, 22 different German minorities belong to it.

Numerous speakers looked back on the work of the past decades in their speeches. "The AGDM is important for all of us. Each individual minority has contacts in Berlin, but together we are stronger. We can learn from each other - not 1:1, but we can exchange ideas and gain new insights from it," said Hinrich Jürgensen, main chairman of the Association of German Northern Silesians. 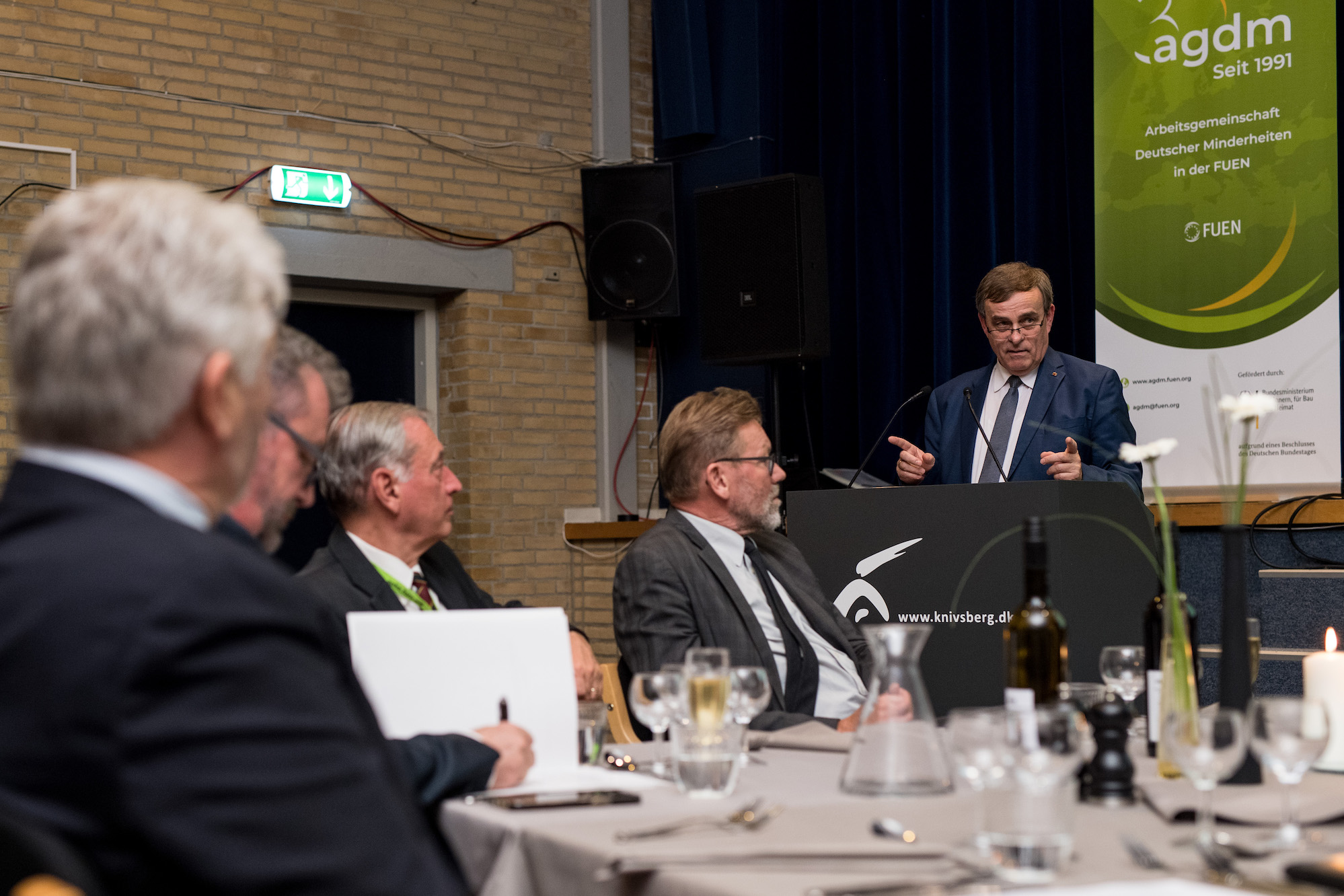 Bernard Gaida, spokesperson of the AGDM, thanked the Federal Government Commissioner for Minorities, Bernd Fabritius, for his commitment and the support from the Federal Republic - but at the same time made it clear that there was still room for improvement when one thought of the very unequal conditions of the various German minorities abroad. 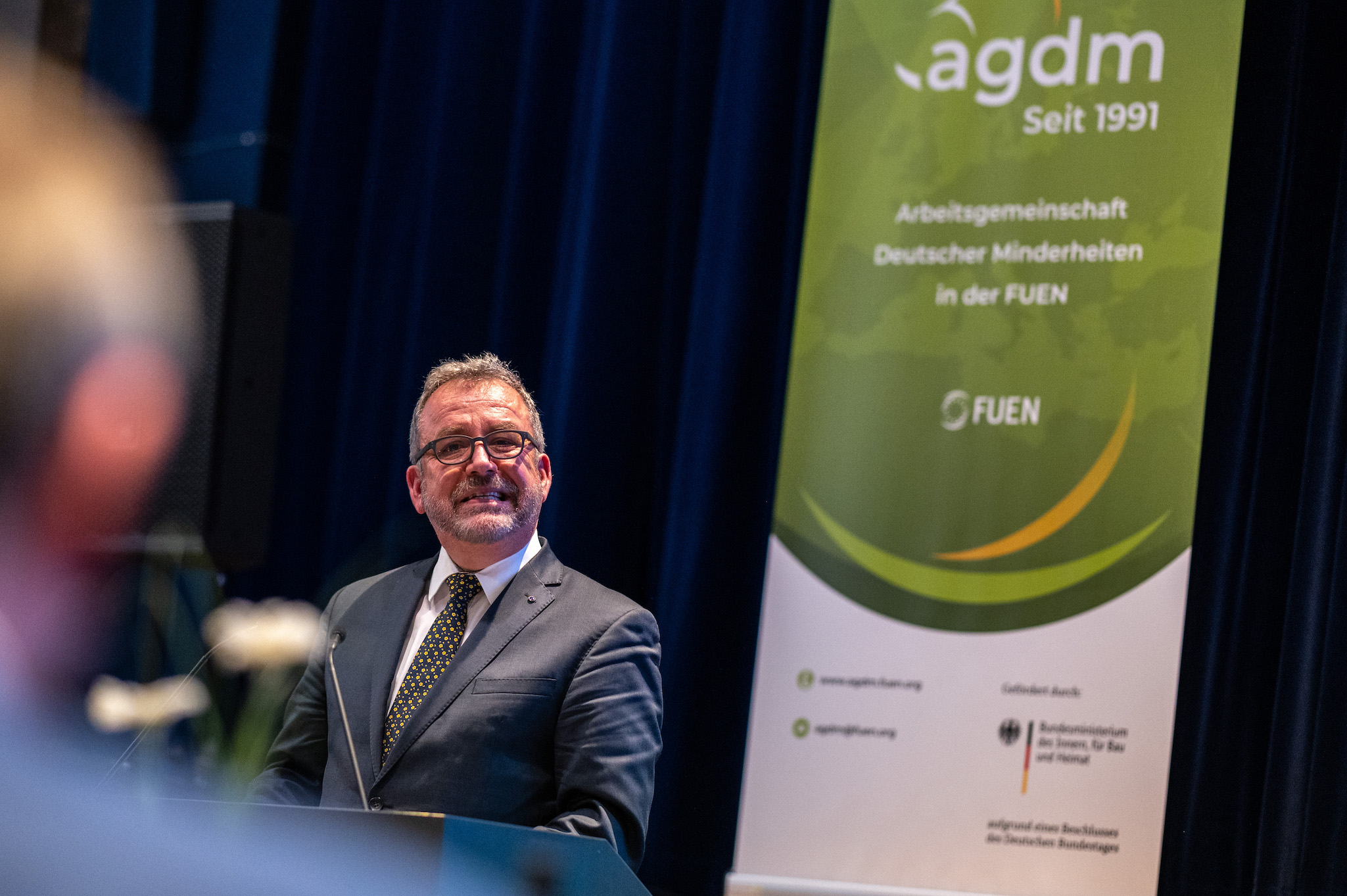 Bernd Fabritius himself praised the selfless and committed efforts of the German minority representatives throughout Europe. "The minorities are bridge builders. They stand for peaceful coexistence and a genuine willingness to engage in dialogue," said the Minorities Commissioner.

His predecessor in office, Hartmut Koschyk, stressed in his videomessage that one must never stand still in the work for more minority rights and always look ahead. FUEN Vice-President Gösta Toft, himself a North Silesian, described the diversity of the AGDM as the real strength of the working group and the German minorities in Europe as an important stability factor.

The ceremony was rounded off by the premiere of the anniversary film with congratulations from all over Europe as well as a music programme worth seeing and hearing by the violinist trio Apassionata from Upper Silesia. 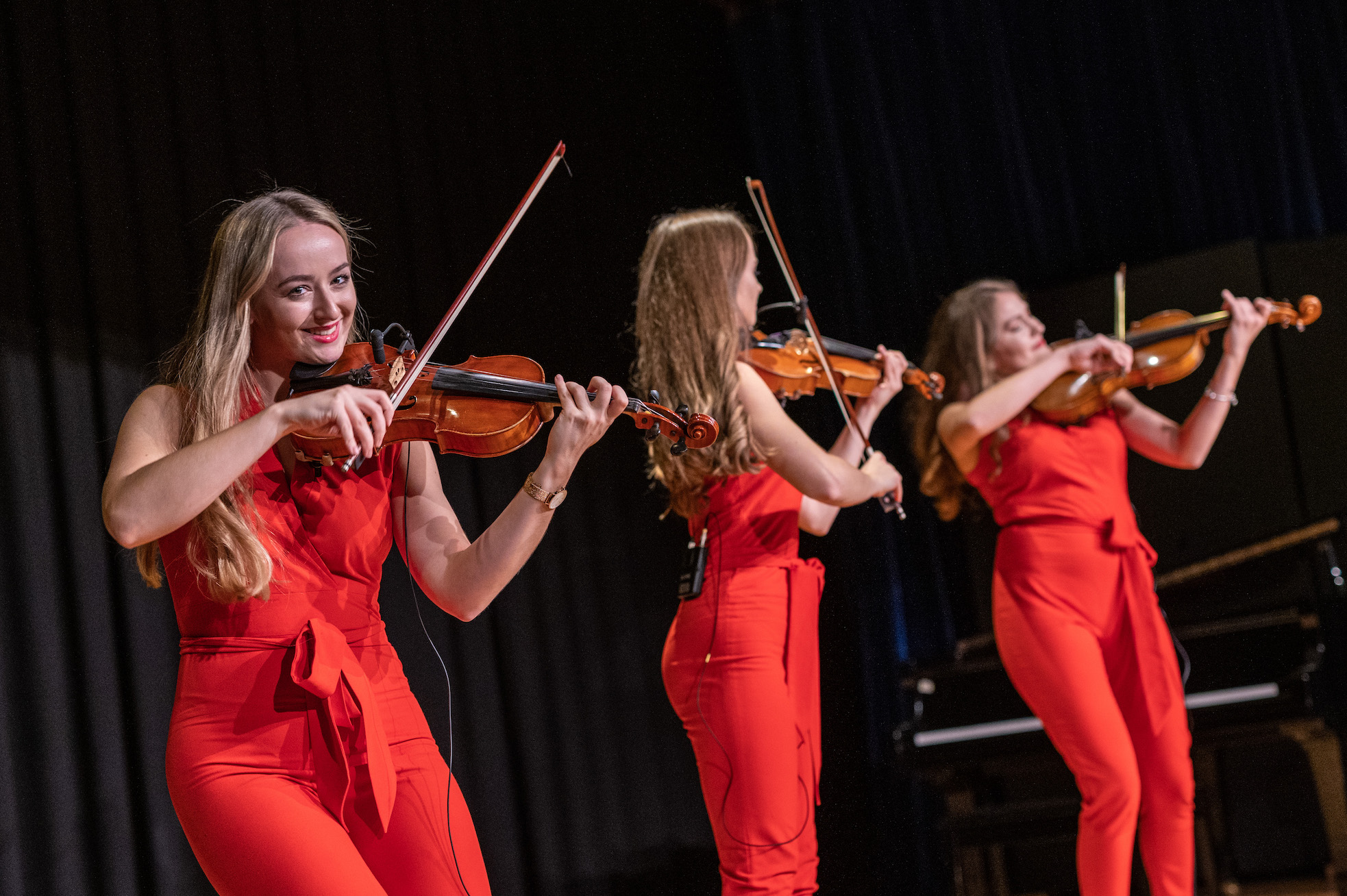 Read more
Conferences, cultural sites and a significant anniversary – the 30th Annual Conference of the AGDM in Northern Schleswig FUEN took part in the European Commission's stakeholder dialogue on access to audio-visual content