20 men and 4 women teams square off at EUROPEADA – find out who plays who in the groups!

Are you ready for the kick-off? 20 men's teams and 4 women's teams which have confirmed their participation in the EUROPEADA got their opponents in the group draw on Monday, 16 May 2022. Some teams unfortunately had to cancel their participation due to various reasons, and a new team, the Slovaks and Czechs in Romania was also welcomed to the European Football Championship of the ethnic minorities, the EUROPEADA 2022, which will take place in Carinthia/Koroška from June 25 to July 3.. 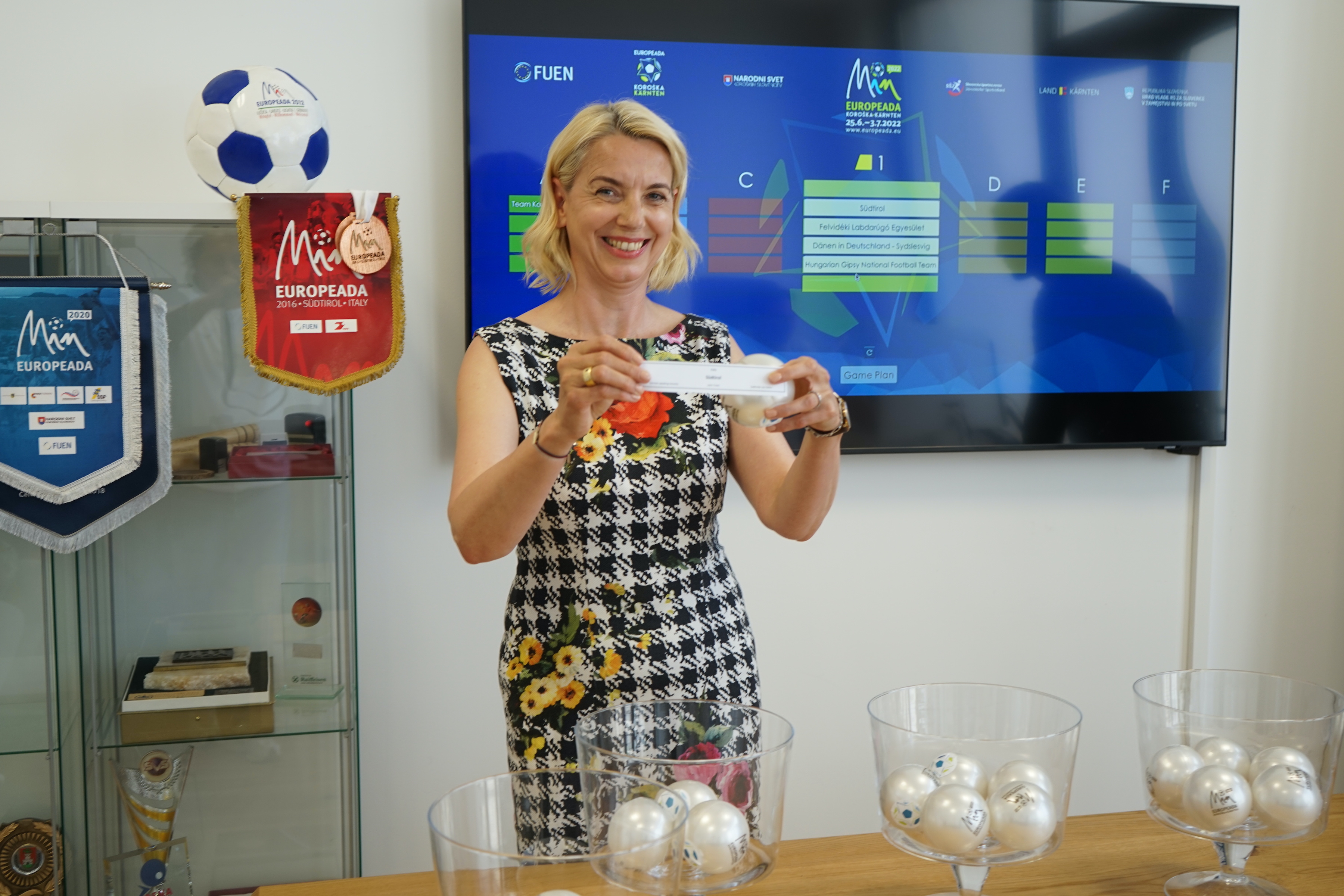 At Monday’s draw, which was streamed live on EUROPEADA’s Facebook page, FUEN Vice President Angelika Mlinar and Marko Loibnegger, President of the Association Europeada and Secretary General of the Slovenian Sports Association in Carinthia made the draw from the four ranking groups.

The men's teams are divided into five groups (A-E) with four teams each. The four women's teams will meet in GROUP W.

These are the groups:

"We are very much looking forward to welcoming you all in Carinthia/Koroška", said Marko Loibnegger after the draw. On behalf of FUEN, Angelika Mlinar wished good luck and fair play to the teams and a very successful event to the organisers.

EUROPEADA is the European Football Championship of the autochthonous national minorities - a major sporting event that combines fair competition and the enthusiasm of a sports festival with the concerns of the autochthonous national minorities. The meeting and exchange of the minorities and the public promotion are in the centre of attention. The Federal Union of European Nationalities (FUEN) organises EUROPEADA in cooperation with the Slovenian Sports Association from Klagenfurt, the Council of Carinthian Slovenes, the province of Carinthia and the Republic of Slovenia.

After being hosted by the Rhaeto-Romans in Switzerland in 2008, the Lusatian Sorbs in Germany in 2012 and the Ladins and German-speaking South Tyroleans in Italy in 2016, EUROPEADA 2022 will take place in Carinthia/Koroška, Austria, from 25 June to 3 July under the motto "TOGETHER UNIQUE / SKUPNO ENKRATNI / GEMEINSAM EINZIGARTIG".

More information about EUROPEADA can be found here.

Read more
A strong woman from Mariupol and the war: FUEN Vice-President meets the Chairperson of the Federation of Greek Societies of Ukraine "I am proud to be a Sinto" - Film about minorities in the German-Danish borderland celebrates premiere in the Minority Competence Network