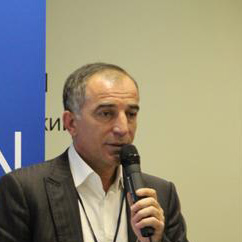 The Karachays and Balkars are two Turkic historic minorities of the North Caucasus living for centuries in the foothills of mountainous regions of the Caucasus,  the highest peak in Europe - Elbrus. Historically, the Karachays lived on one side of Elbrus and the Balkars on the other. The Karachay-Balkar language belongs to a Kipchak group of the Turkic family. The policy of Tsarist Russia and the Soviet Union was to divide and treat Karachay and Balkars as separate groups. As a result, divided Karachay-Balkar people  today live apart in two different autonomous republics of the Russian Federation - Karachay-Cherkessia and Kabardino-Balkaria. Karachay constitute 36% of the population of Karachay-Cherkessia amounted to 200,000 and Balkar population to 100,000 in Kaabardino-Balkar Autonomous Republic. November 2, 1943 and March 8, 1944 are two tragic dates for the Karachay-Balkar people commemorating the deportation on the ethnic grounds by the Soviet regime.  Two brotherly ethnic groups had been in exile for 14 years until 1956, the year when the right to rehabilitation and repatriation was regained. Karachay-Cherkes Autonomous Oblast, founded in 1926, has been restored the following year in 1957. On March 28, 1957 the session of the Supreme Council Kabardinsky ASSR adopted the Resolution on the restoration  of the statehood of Balkars. The former name of the republic - Kabardino-Balkaria has been restored that allowed Balkars to return to their former place of residence. The Karachay-Balkar of today, still separated and living across two different autonomous republics of the Russian Federation, are trying to preserve their traditional culture, language and identity. The deportation and its consequences are a central topic of the modern history of Karachay-Balkar people. A growing academic interest to the subject sheds light on legal, historical and humanitarian-cultural aspects of the deportation.