Education and the Slovene minority in focus at the FUEN Congress

A tree must have strong roots in order to thrive. It is no different with minority education: one must focus on good language education in the daycare centers – later one can work on expanding the crown of the tree, i.e. the high schools and universities, accordingly. With this comparison, Igor Giacomini, President of the Regional Commission for Slovene Education in Friuli Venezia Giulia, made the relevance of early education clear at the 2021 FUEN Congress’ panel on minority education systems in Europe, on the second day of the event.

Zora Popova, who deals with minorities from a scientific point of view, gave an insight into the results from the study "Minority Monitor" on the educational situation of autochthonous, national minorities. During the survey it became clear that challenges lie mainly in the areas of personnel, financing and political acceptance. 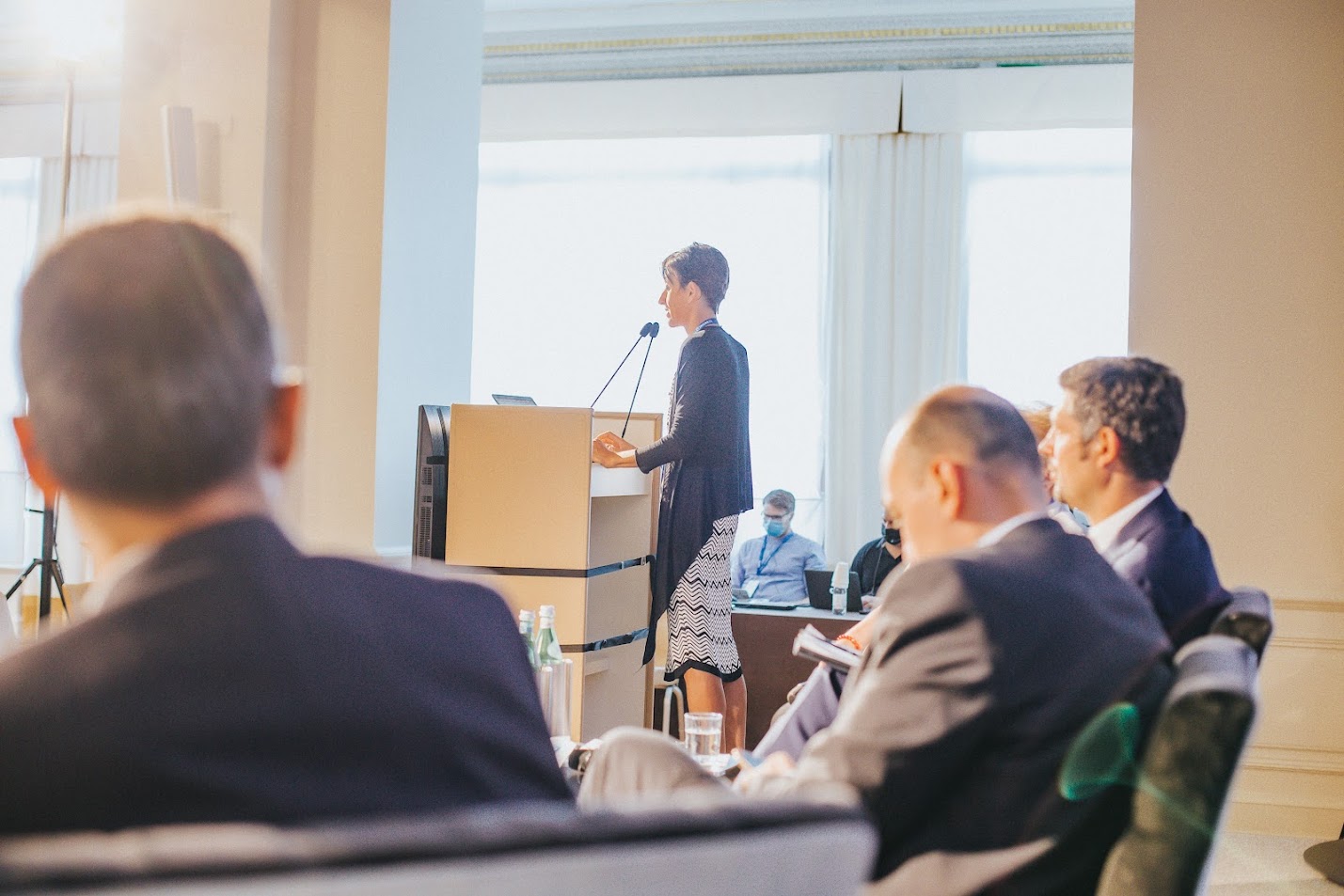 The shortage of skilled workers in the field of education is noticeable in most minorities; there are fewer and fewer native-speaking teachers, everyone on the podium complained. Igor Giacomini also sees a challenge in the complicated institutional anchoring of Slovenian schools in Italy, which he represents. Work also needs to be done on teaching as an overall package of language and culture - often it stops at pure language teaching.

In comparison, the German minority in Hungary is in a much more privileged position. Ibolya Hock Englender explained the educational autonomy of the total of 13 recognized national minorities in Hungary, which are considered parts of the normal public system – with the same content in a different language. In daycare centers and schools, various models exist from monolingual to bilingual to mixed forms. "Unfortunately, due to the lack of German-speaking educators, very few daycare centers and schools manage to implement a monolingual concept," Englender lamented. "But this is precisely the age when children can learn the minority language by simply imitating it as a natural language acquisition."

What are the conditions in which minority language instruction works well? Prof. Dr. Paul Videsott was scientifically concerned with this question and found three answers. Language instruction works well "where the minority language is compulsory from kindergarten to university, where teachers have a good command of the minority language and where minorities and majorities live well together side by side." Therefore, he pleads for a well-founded university education for prospective teachers and emphasizes how important it is to use high-level language in the process – "no village dialect, please." 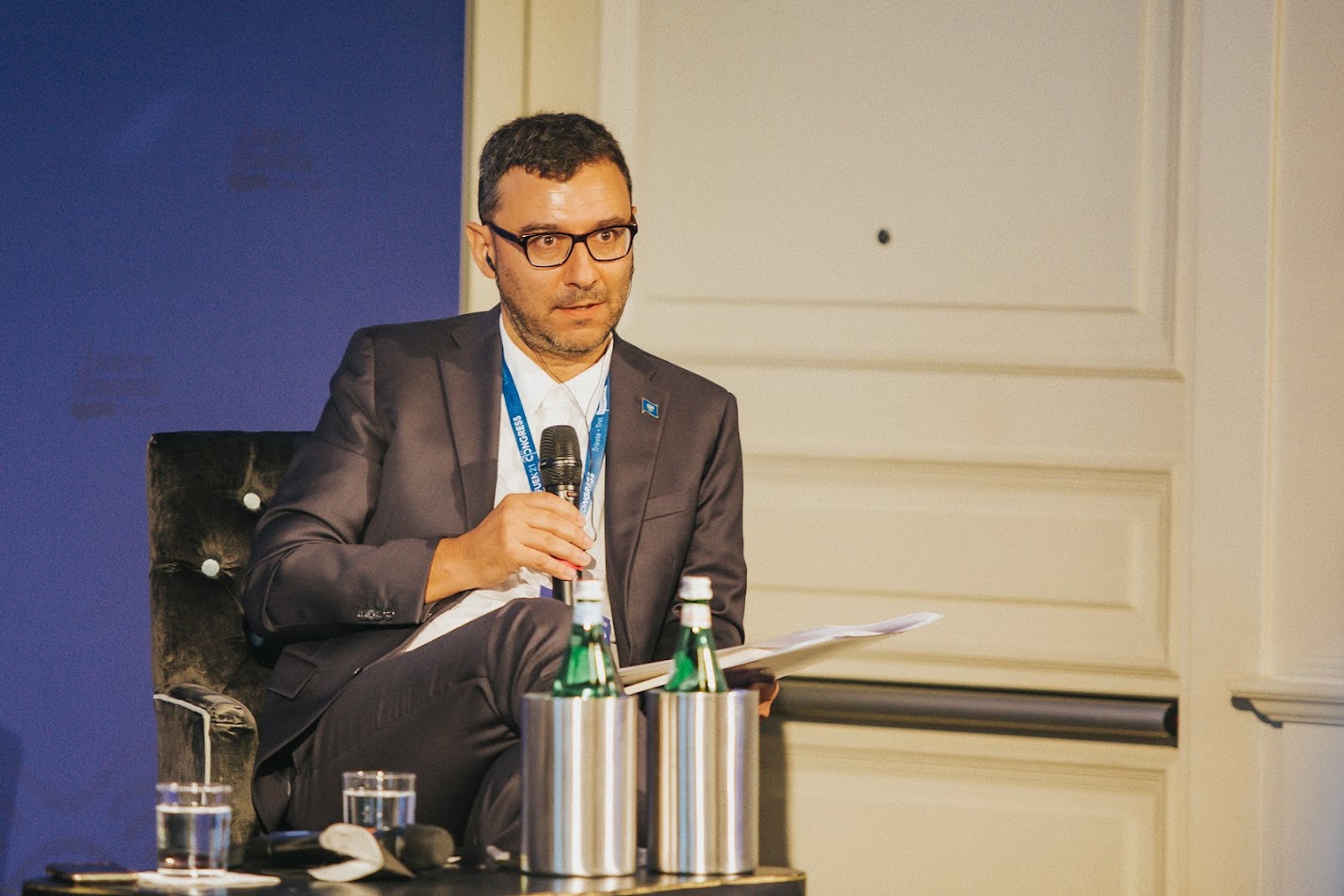 The second panel of the day focused on the Slovenian Minority in Italy, specifically in the autonomous region of Friuli Venezia Giulia. Dr Helena Jaklitsch, Minister for Slovenians Abroad gave a welcome overview on how Slovenia helps Slovenes living abroad. This is a duty of Slovenia as a kin-state, enshrined in the country’s Consititution. “We are committing a lot for the Slovene minority to develop, as this conercns not only Slovenia, but all of us”, she said. Slovenia has 2 million inhabitants, but 500,000 Slovenes live outside its border, mainly in Italy, Austria, Hungary and Croatia. She also presented the legal framework for minority protection in Slovenia. 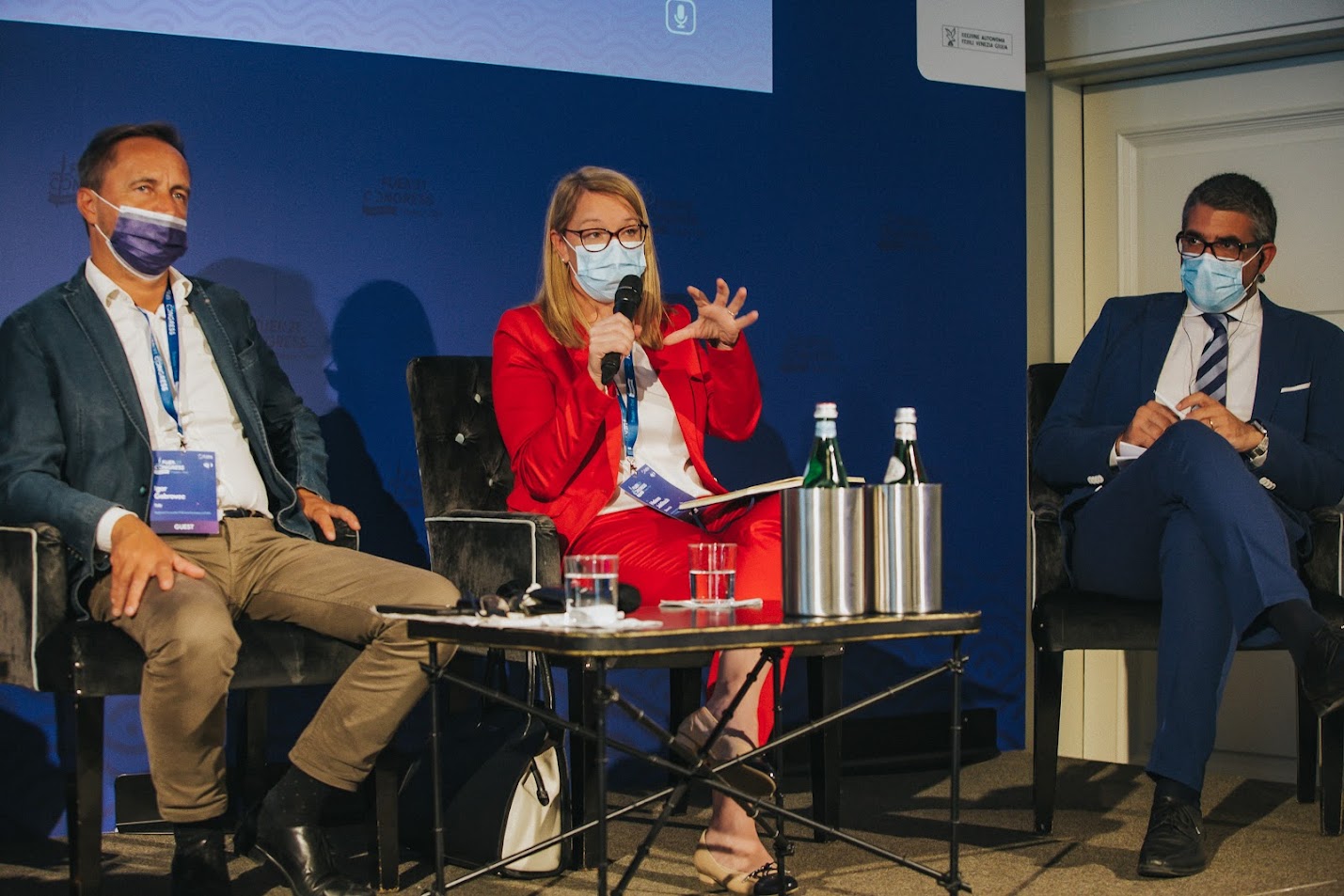 With the moderation of Julijan Čavdek from the FUEN Congress’ host ing organisation Confederation of Slovene Organisations – SSO, Sara Brezigar, President of the Slovenian Research Institute (SLORI), Pierpaolo Roberti, Provincial Councilor with responsibility for linguistic minorities in Friuli Venezia Giulia, Marco Jarc, Chairman of the Parity Committee for the Problems of the Slovene Language Minority and Igor Gabrovec, Provincial Councilor and Secretary of the Slovene Union party presented the most important aspects of the life of Slovenes in Italy.

The vast majority of the community lives in the provinces of Trieste, Gorica and Udine, and estimates of their number vary significantly. Until the turn of the last century, Trieste had been the center of the community. The hardships during and following the two World Wars had a negative effect the community, but their situation got better with Italy signing international treaties on minority protection and finally the 2001 law concerning the rights of the Slovenes in Italy. 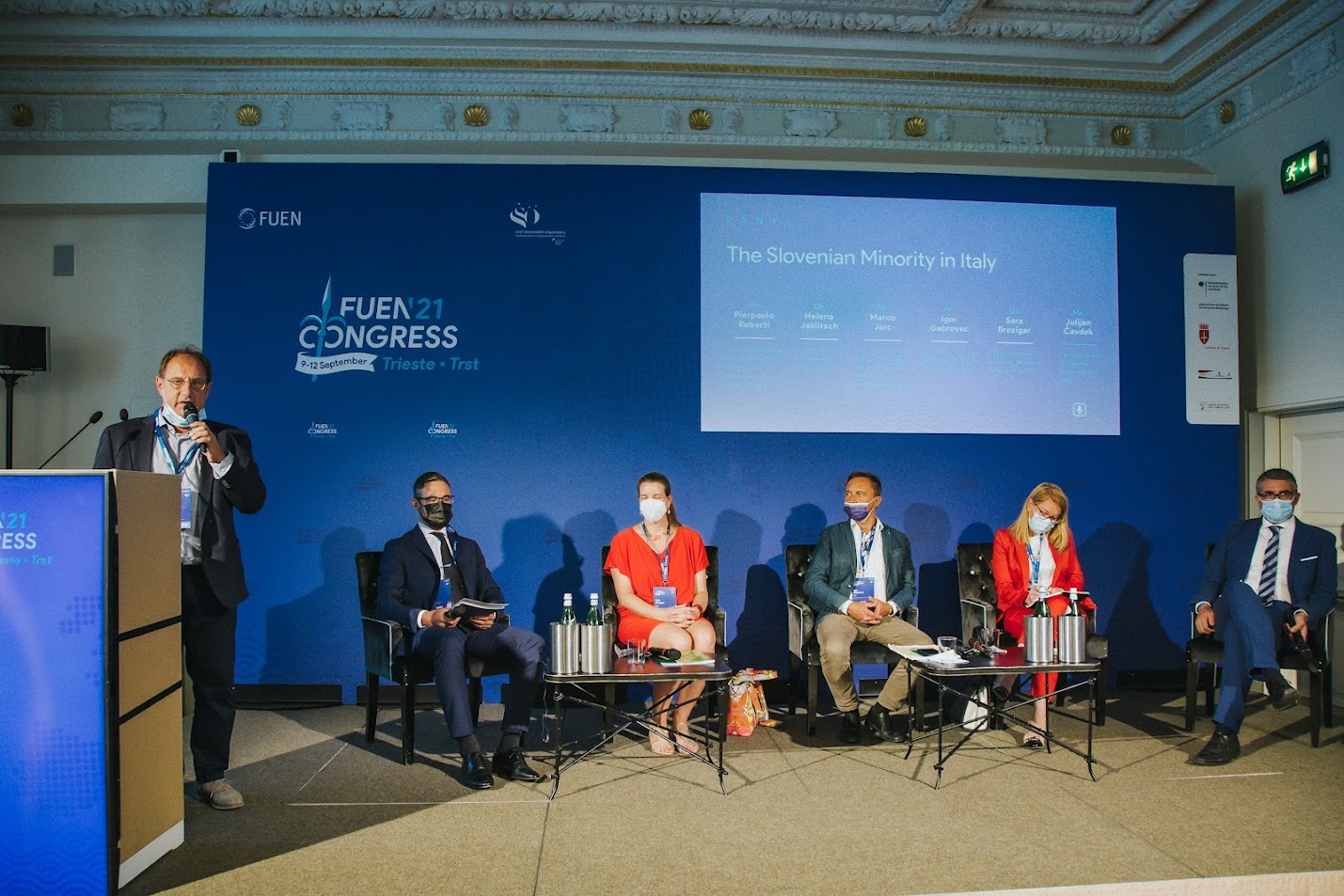 Members of the minority have a well-developed Slovenian education system. An interesting point raised was that the different generations of Slovenes have different sense of belonging, different value sets. The youngest generation never experienced a world in which there is a border between Italy and Slovenia, as one of the speakers pointed out.

One of the present aspirations of the community is to increase the visible bilingualism, meaning that they aim to have more opportunities of using their mother language in the public sphere. The institutions ensuring the minority protection were also presented, as well as the non-governmental organisations of the Slovenes. Political representation was another issue raised in the panel, as the Slovene minority needs to find the most appropriate and non-ideological formula for representation. 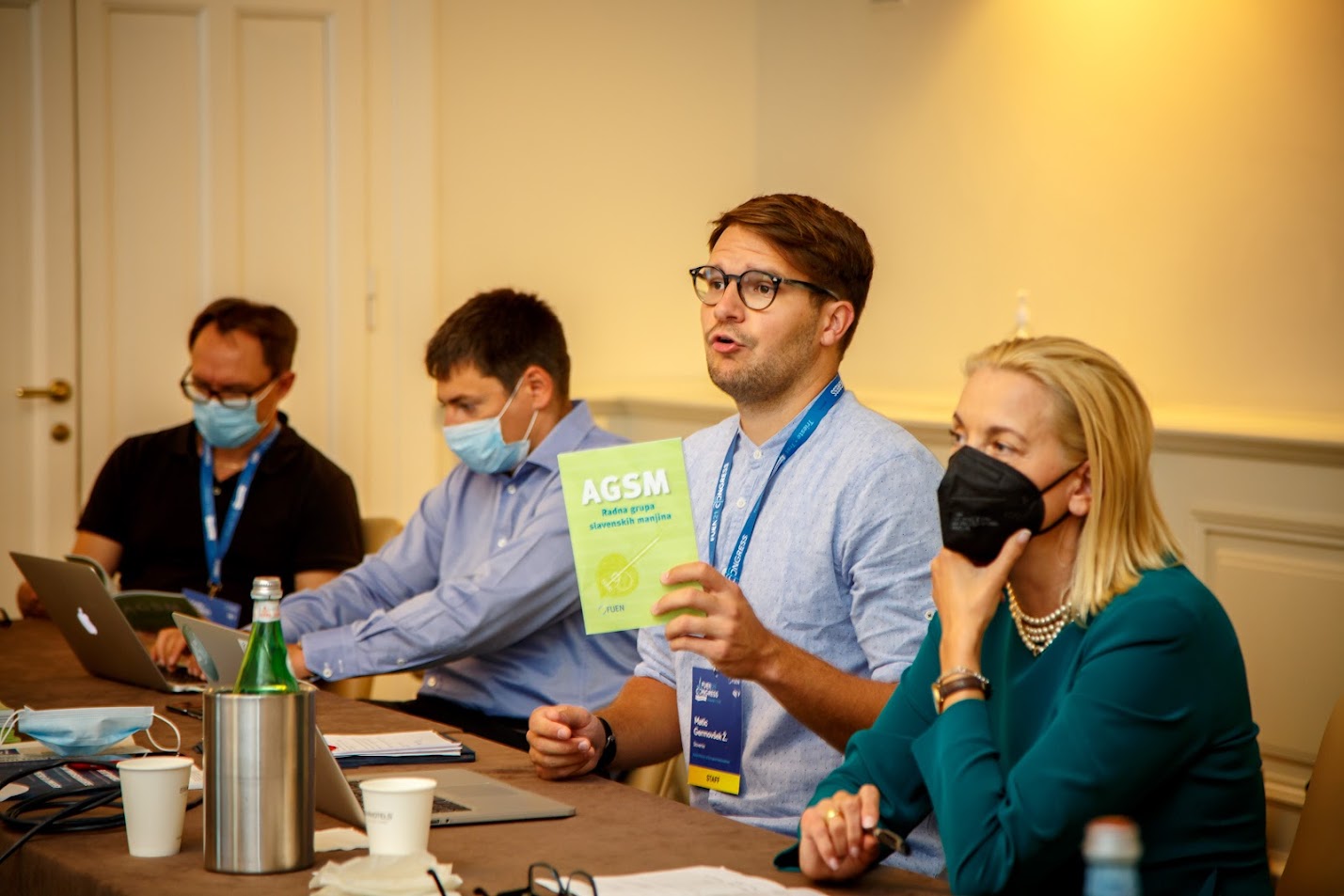 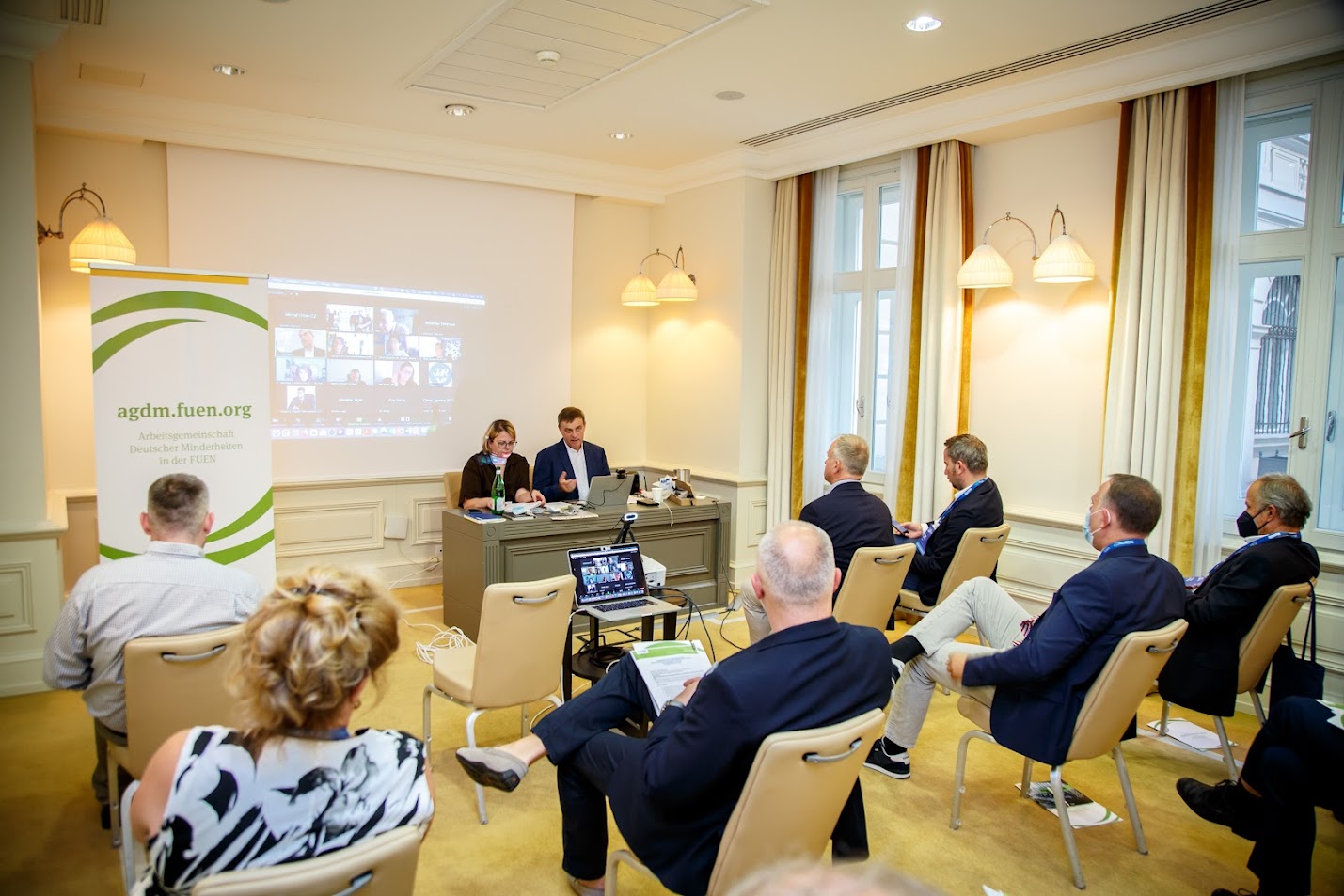 Tovább
FUEN Congress 2021: Europe’s future has to be the future of autochthonous minorities, too The FUEN Assembly of Delegates demands in resolution EU Treaty change to include minority protection as an unambiguous competence