The economic added value of languages in cross-border cooperation was the first major topic of the Forum of European Minority Regions yesterday. In his lecture, economist Prof. Bengt-Arne Wickström (University of Budapest) shed light on the added value of linguistic diversity for the economic performance of regions – after all, a common language facilitates contact and promotes trade. "Minority and regional languages are therefore a valuable asset that should be promoted," said the researcher.

Many studies have shown that not only English counts in the world of work, but that other, smaller languages can also be of great relevance, he said. "It is important to ensure that other languages are also cultivated in order to have a range of different languages in the country. In my opinion, education policy takes too little account of this. On the contrary, the tendency is rather away from it," Wickström said.

In the following, this was illustrated by concrete examples: 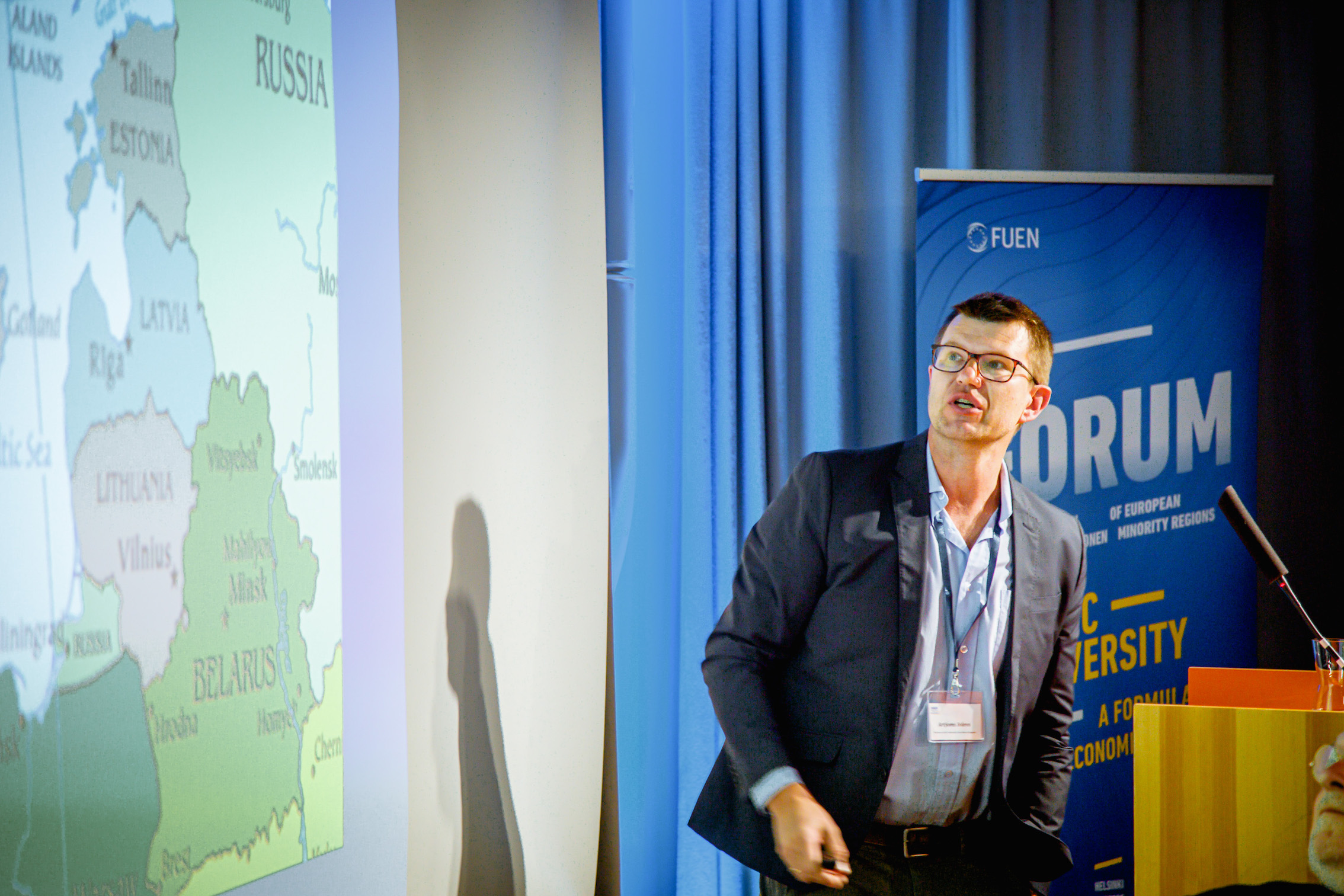 Artjoms Ivlevs, professor at the University of Latvia, gave an insight into the added value of the Russian language in the Baltic countries. His studies there have shown: The more immigration, the more trade and foreign investment and the bigger the labour market. "Ethnic diversity or immigration are factors for increasing productivity," he concluded. 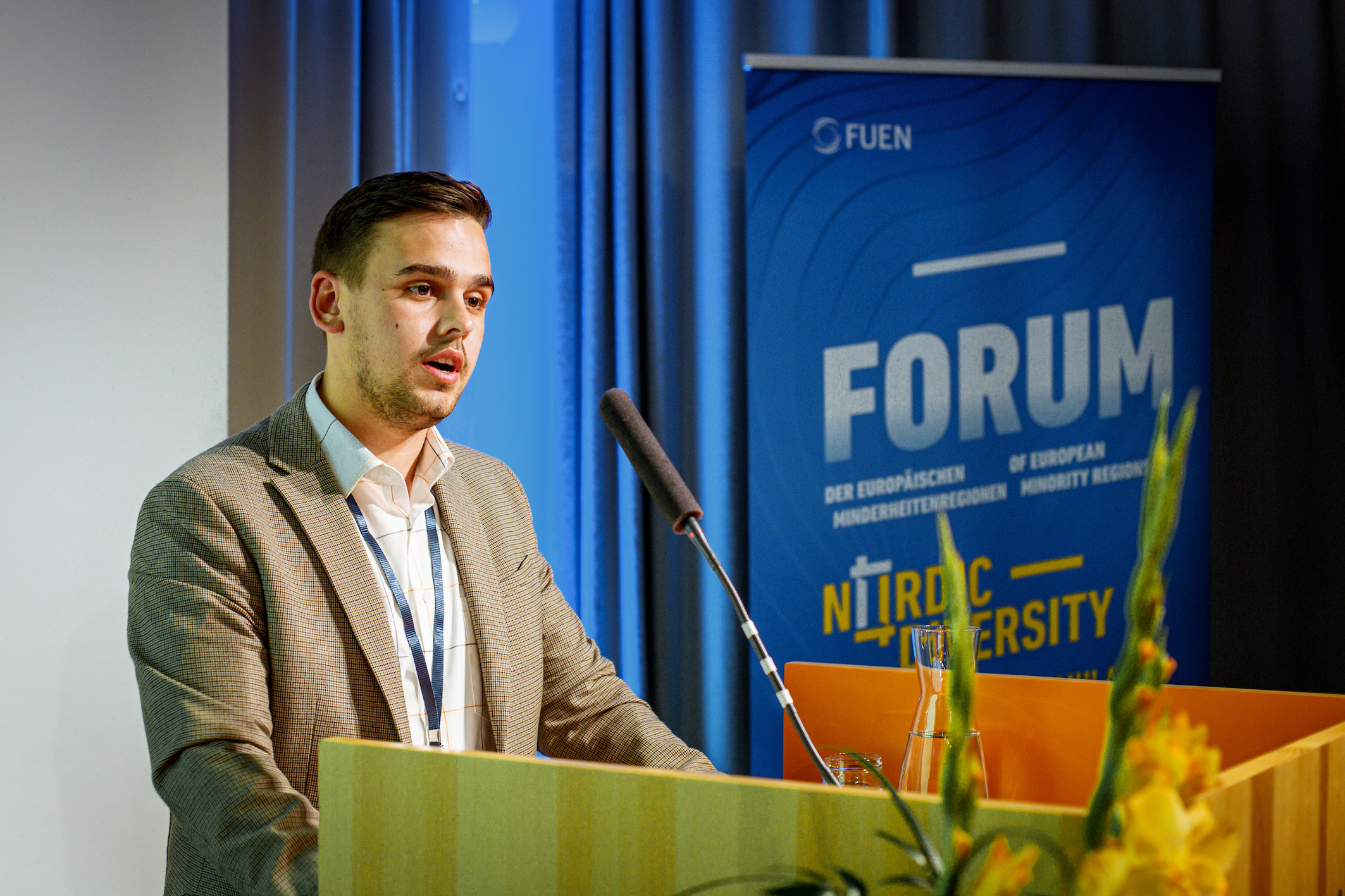 An exciting example in terms of language diversity is Belgium: Here, with French, German and Dutch, there are three official languages and four language areas, Grégory Dalbert, political advisor to the government of the German-speaking community in Ostbelgien, explained in his presentation. "The German-speaking community in East Belgium is one of the best-protected and best-represented communities in Europe," he praised. Multilingualism is a determining factor on the labour market there and is explicitly demanded by companies, he said. 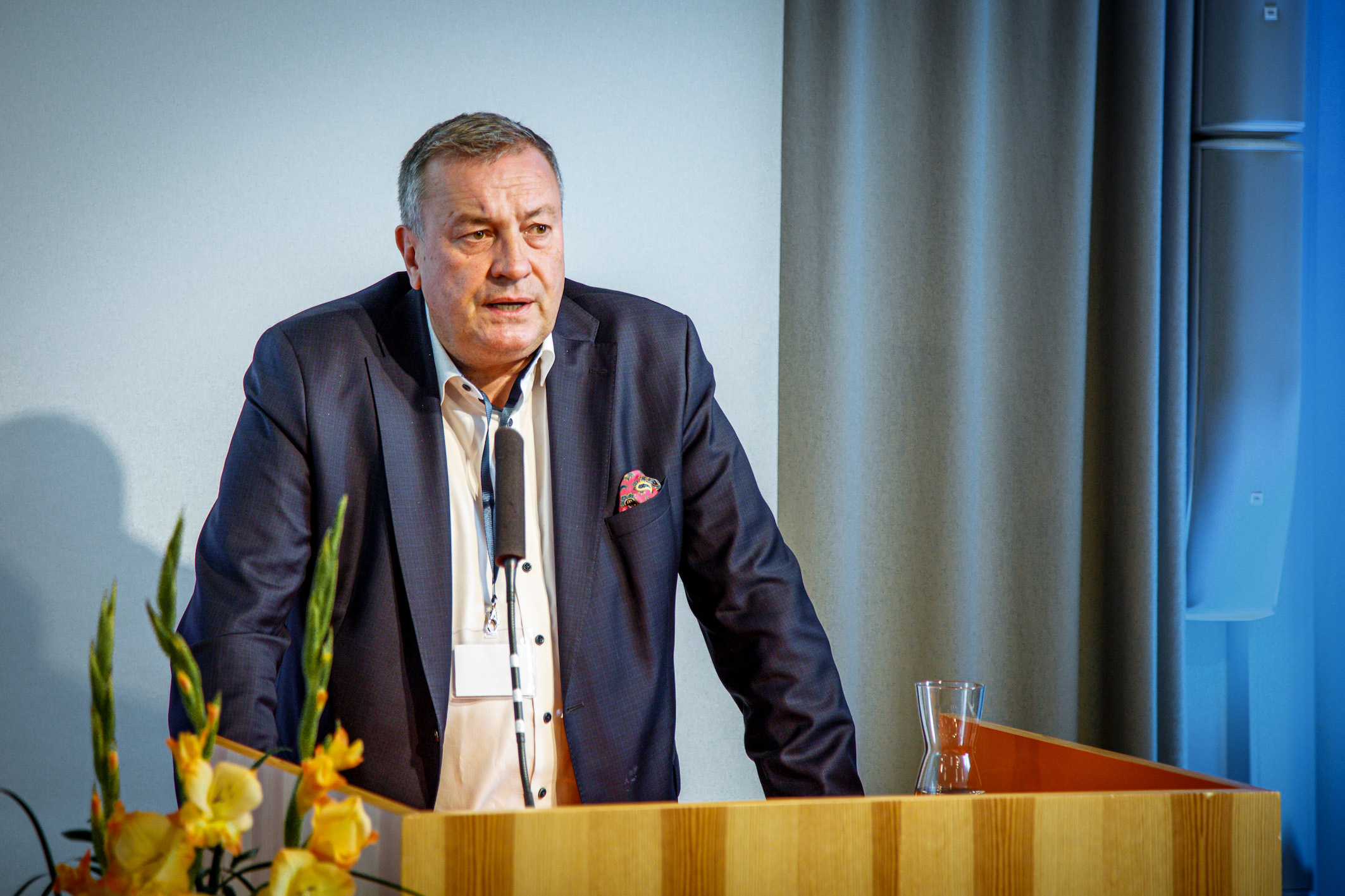 Finally, Kjell Skoglund, Director of the Finnish-Swedish Chamber of Commerce, explained the importance of the Swedish language for Finnish companies. "To be competitive, you have to know Swedish - otherwise you will be left out." Sweden has recently become even more important as a trading partner, he says, as evidenced by a doubling of applications for membership in the last ten years. 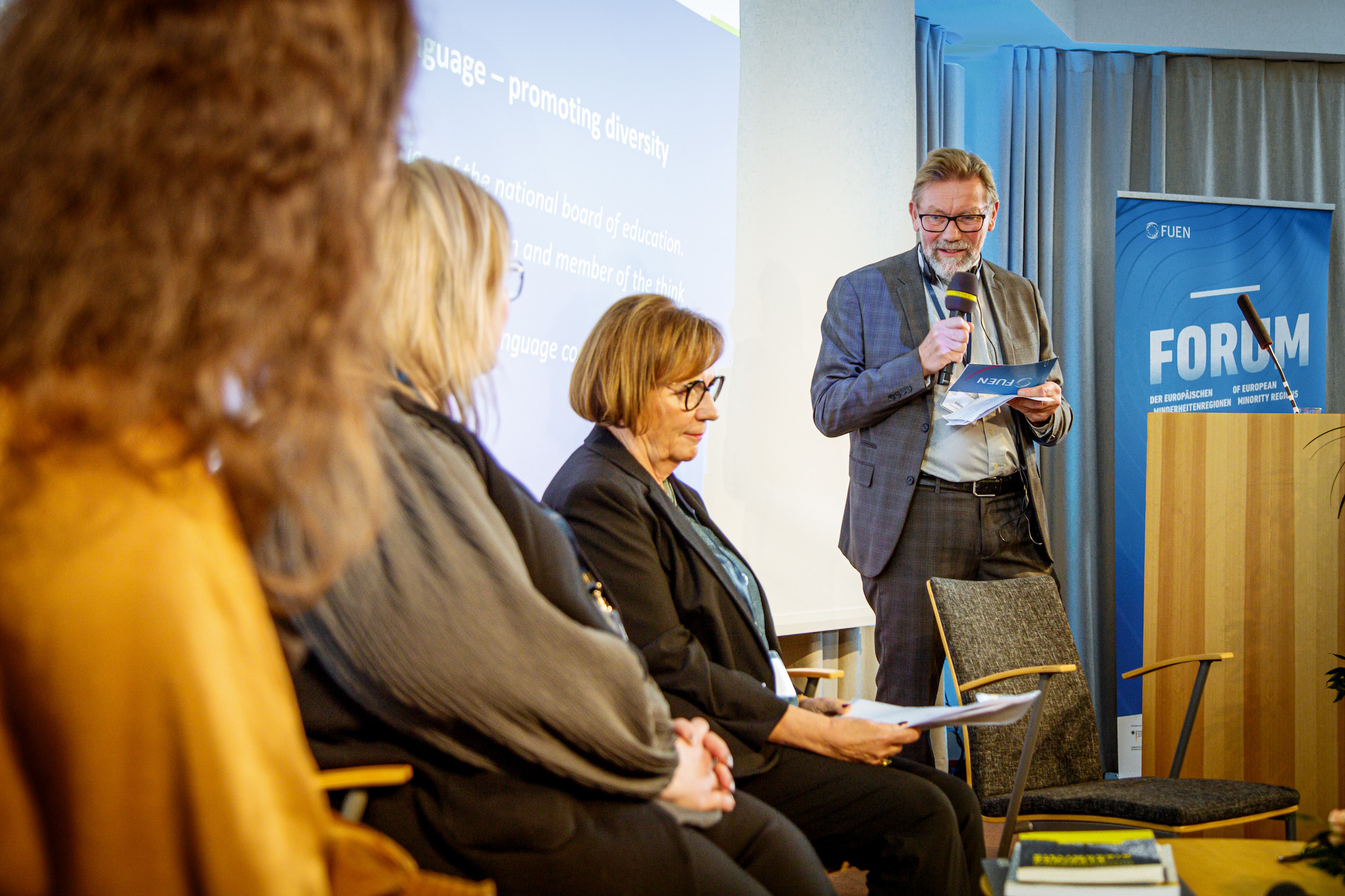 The second panel of the day, entitled “Learning your neighbour’s language – promoting diversity through education” revolved around the idea that moderator Gösta Toft, FUEN Vice President opened the discussion with: “Speaking more languages is a true added value, even if it is not always recognised as such.” 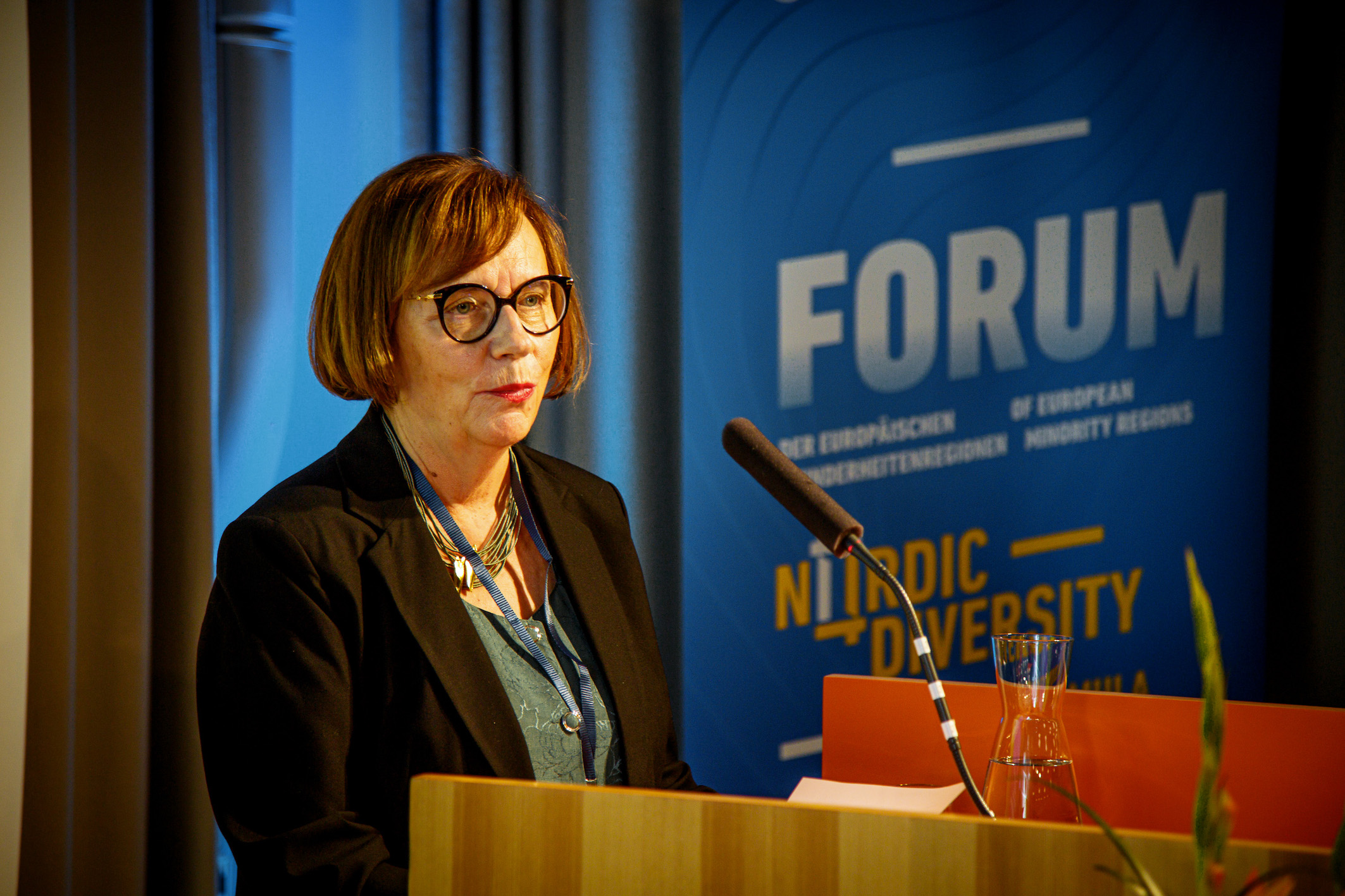 Gun Oker-Blom, former Head of the Swedish Section of the National Board of Education presented the Swedish-language education in Finland. Even if only 5,2% of the population is Swedish speaker in Finland, Swedish is an official language and Swedish education forms its own system with 62,300 pupils in the general education system and 13,000 more in higher education. According to her report presented at the Forum, the big picture shows that Swedish-language education works well overall, it is dynamic and vital. However, there are gaps in the system, such as the lack of Swedish-speaking experts in key areas like healthcare, law or education; there is insufficient data on the system; and a higher level of Finnish language knowledge is needed. 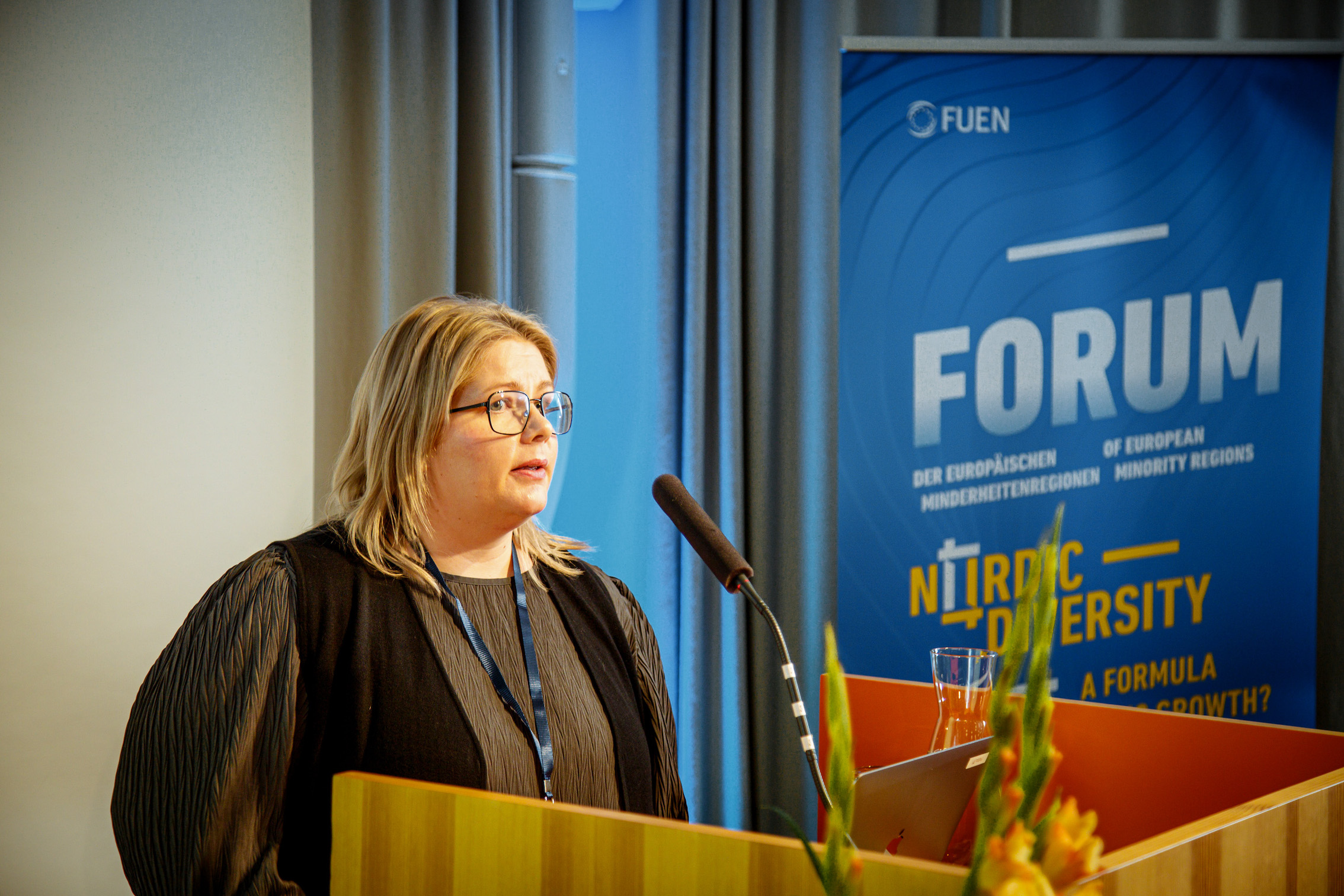 According to Petra Palkio, teacher, former Vice Chairperson and Board Member of the Sweden-Finnish Delegation and Member of the Think Tank V-Akka, the situation is far worse in Sweden regarding the Finnish language and education. Signs of deterioration are visible, and Finnish is losing momentum, as she said, because of the one-language norm and the assimilation process which can be felt even in schools in which Finnish is taught. A revised law in 2019 gives some hope, as it states that minorities should state their needs and  wants and influence decision-making in the early stages, but in the real life this is still in the making. “We have more rights on paper than ever before, but on the local level we need more effort”, as Petra Palkio put it. 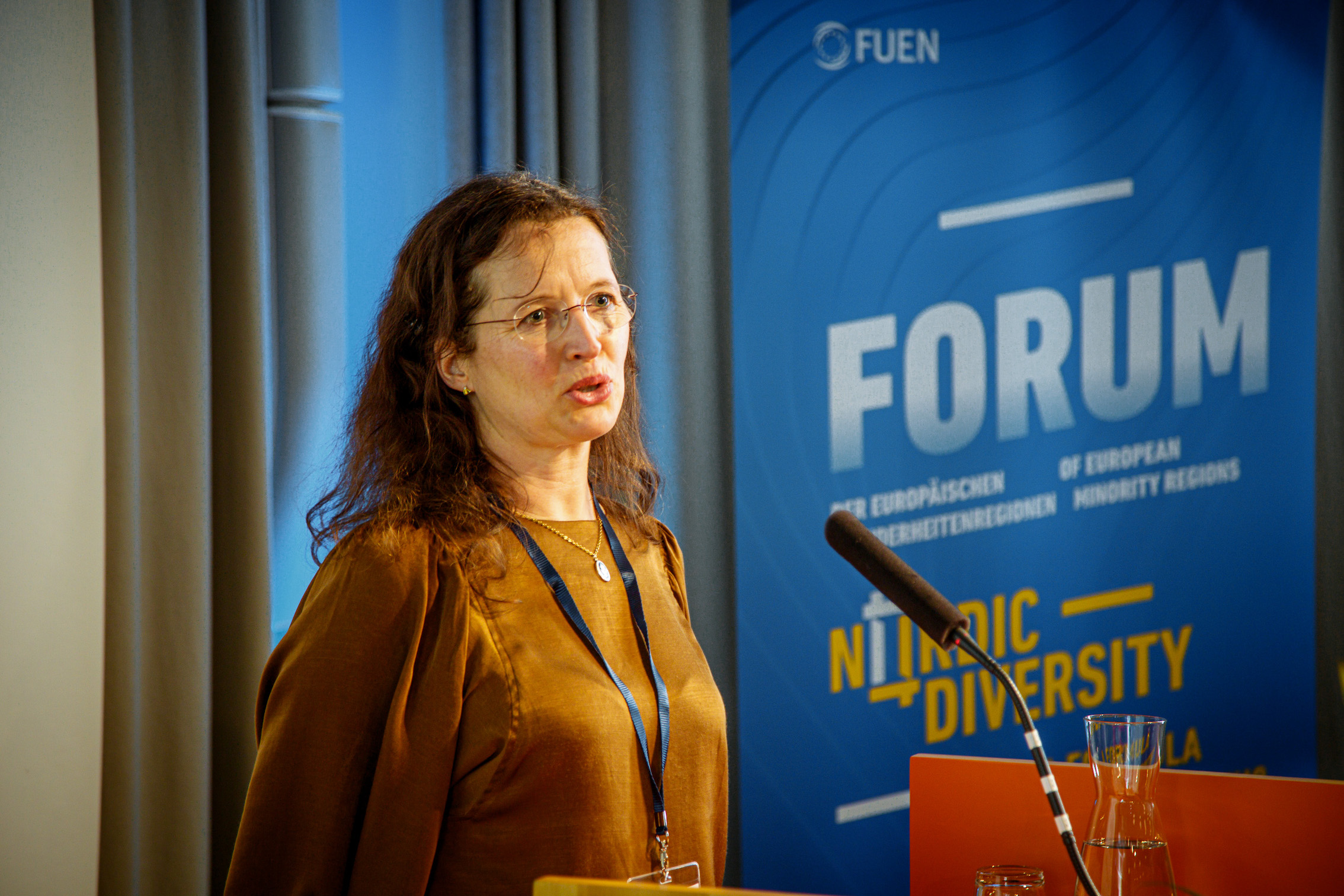 Anja Peist, Project assistant in the field of German-Danish language cooperation gave an overview on the cooperation and language strategy in the Sønderjylland – Schleswig Region, which exists since 1997 and includes four Danish municipalities, two German municipalities and the city of Flensburg. In the region, language plays a huge role in the cross-border collaboration, and the language strategy adopted in 2019 promotes using the neighboring languages by as many people as possible, and emphasizes early learning, lifelong learning and authentic encounters in developing language skills.

Прочитать больше
Forum of European Minority Regions in Helsinki starts with an appeal: "Give language minorities a new status" Autonomous regions in the North as a model