Forum of European Minority Regions in Helsinki starts with an appeal: "Give language minorities a new status"

The event entitled "Nordic Diversity - a Formula for Economic Growth?", was organised by FUEN (Federal Union of European Nationalities) in cooperation with the Finnish-Swedish Folktinget and is attended by around 90 participants from more than 30 European countries.

In their opening speeches, the speakers addressed various aspects of Nordic cooperation. Gunvor Kronman, Executive Director of the Swedish-Finnish Cultural Centre Hanaholmen, which is also the venue of the Forum, pointed out to "exploit the potential of networking and never stop doing so". The Nordic region also strives to constantly update its policies to intensify integration further - also with regard to trade: after all, it is much easier to sell something if you speak the customer's language. 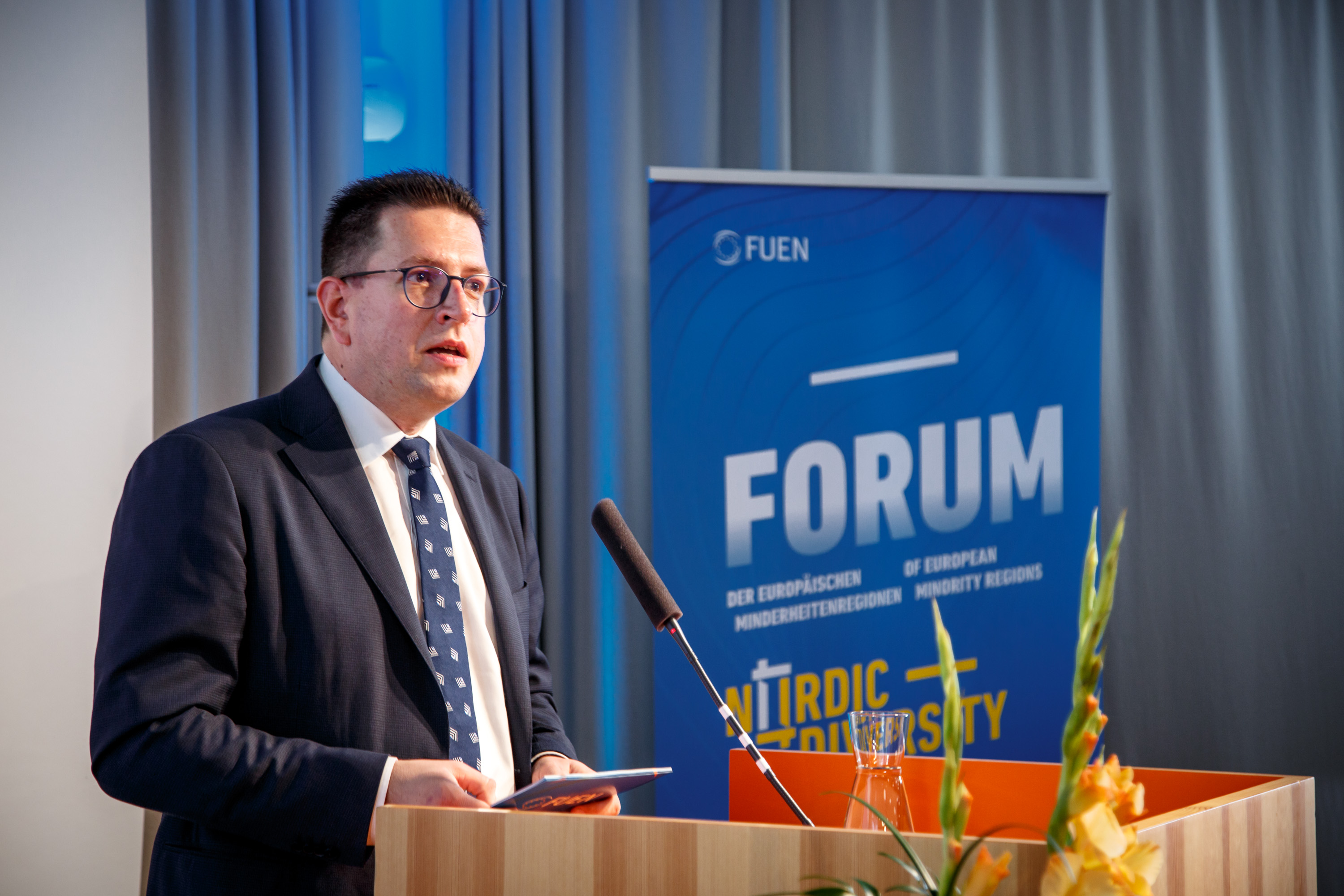 In his opening speech, FUEN President MEP Loránt Vincze said he was glad to be able to take part in this discussion, in which the focus is not only on words, but on concrete actions and tangible results of cross-border and regional cooperation, which also includes linguistic minorities. He pointed out that from the point of view of minority protection, this region is of great importance and the results "show both us and the whole world that learning each other’s language is not a burden, but an asset. We need to give language minorities a new status that directly contributes to the future prosperity of Europe as a whole," he stated. In his view, the EU is trying to redefine itself and this offers a new opportunity to restore relations between majorities and minorities. One of the issues that FUEN is advocating in this debate on the future of Europe is cross-border cooperation, he said. 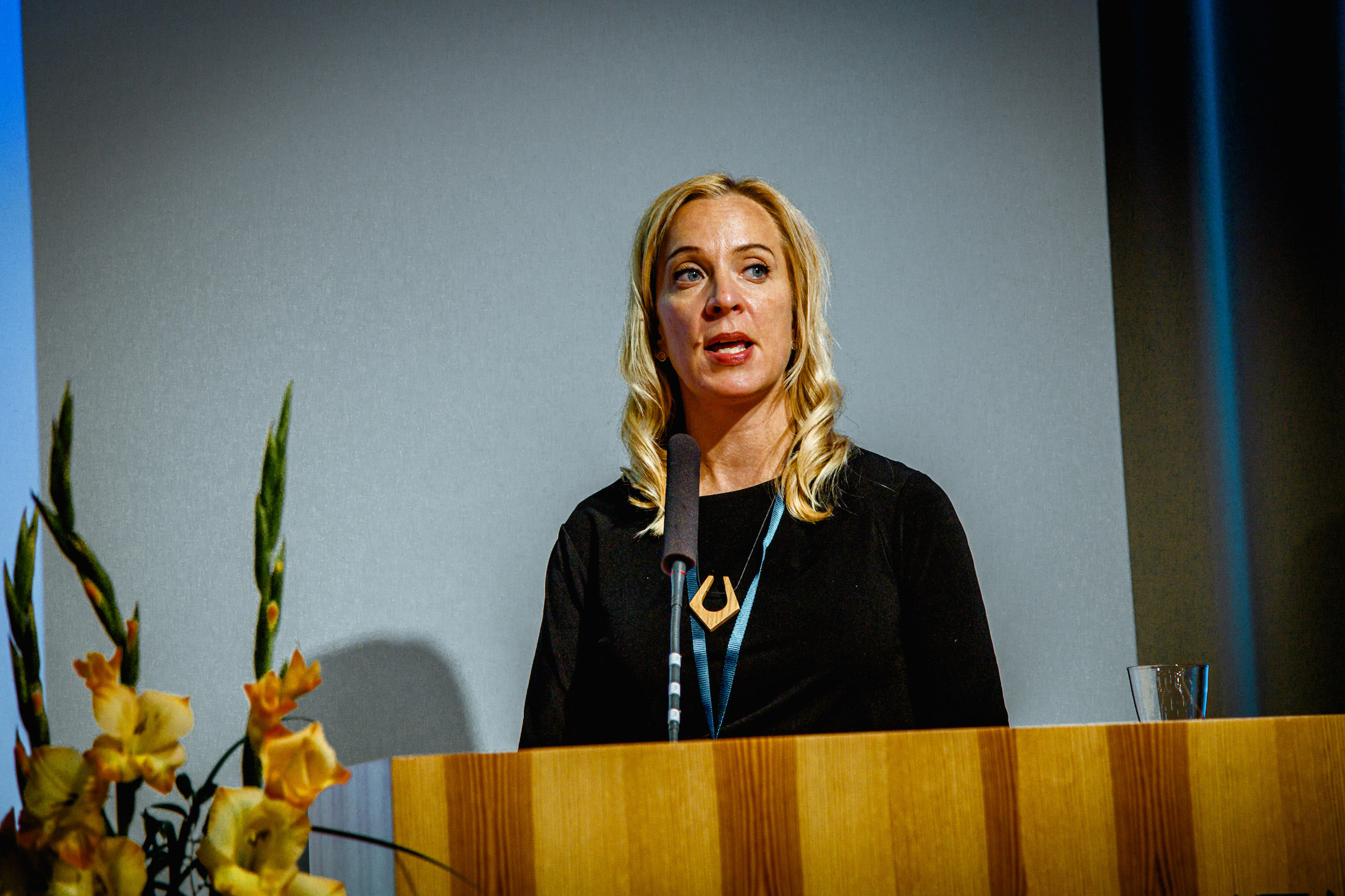 Sandra Bergqvist, President of Folktinget, the Swedish-speaking parliament in Finland, elaborated on the importance of communicating in the mother tongue. "The mother tongue gives us the opportunity to nuance." As a country of immigration, she said, different cultures and languages have historically always been represented in Finland, which is why linguistic minorities are also part of the country's culture. "Nevertheless, we must continue to work on highlighting this as a strength." Bergqvist and the Foktinget are committed to emphasising the Swedish language as a success factor for Finland and strengthening its position. 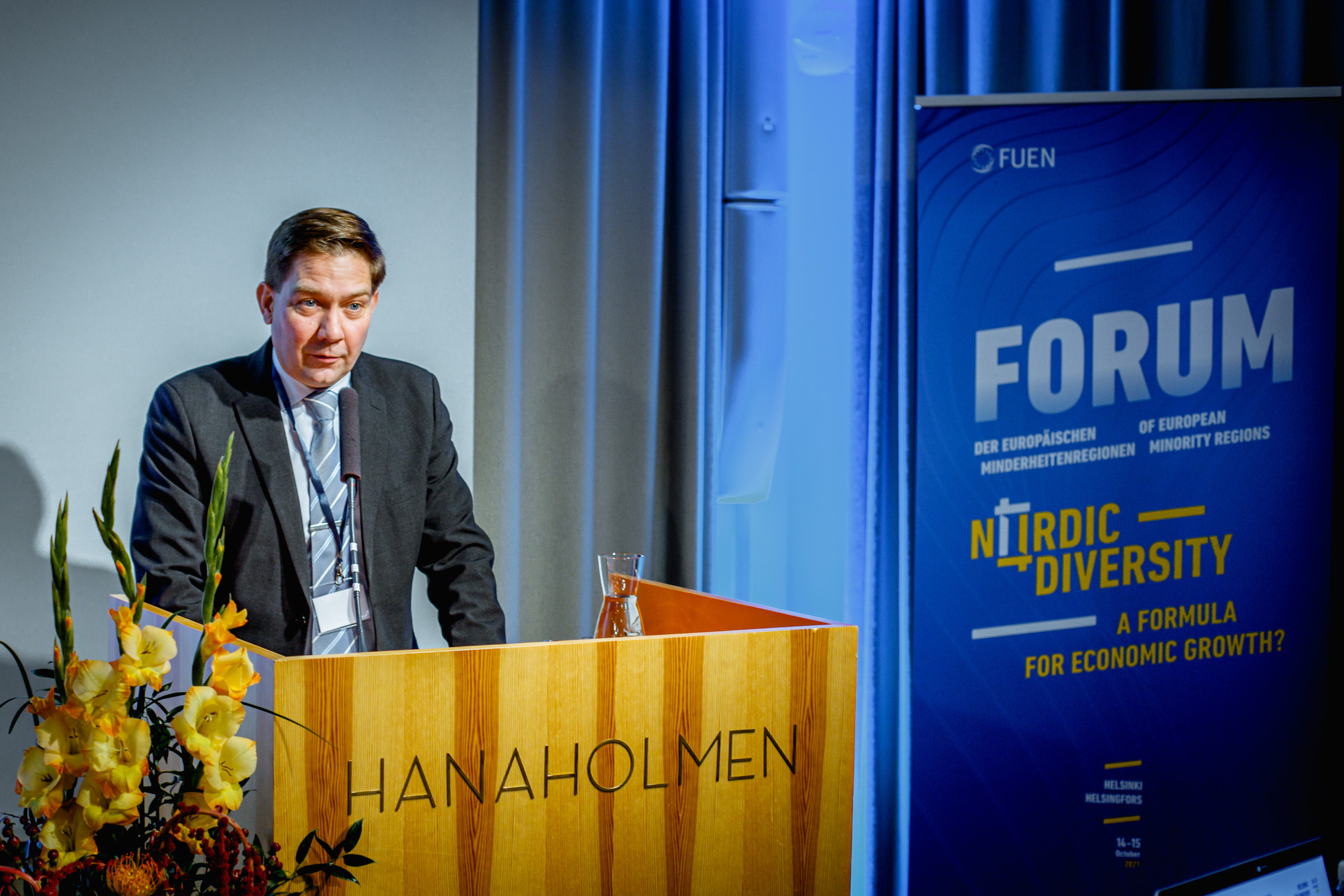 Thomas Blomqvist, Minister for Gender Equality and Nordic Cooperation in the Finnish Parliament, presented the Nordic countries' grand vision: "The North should become the most sustainable and best-integrated region in the world by 2030." Not only the five Nordic states, but also the autonomous regions of the Faroe Islands, Greenland and Åland are working towards this aim. 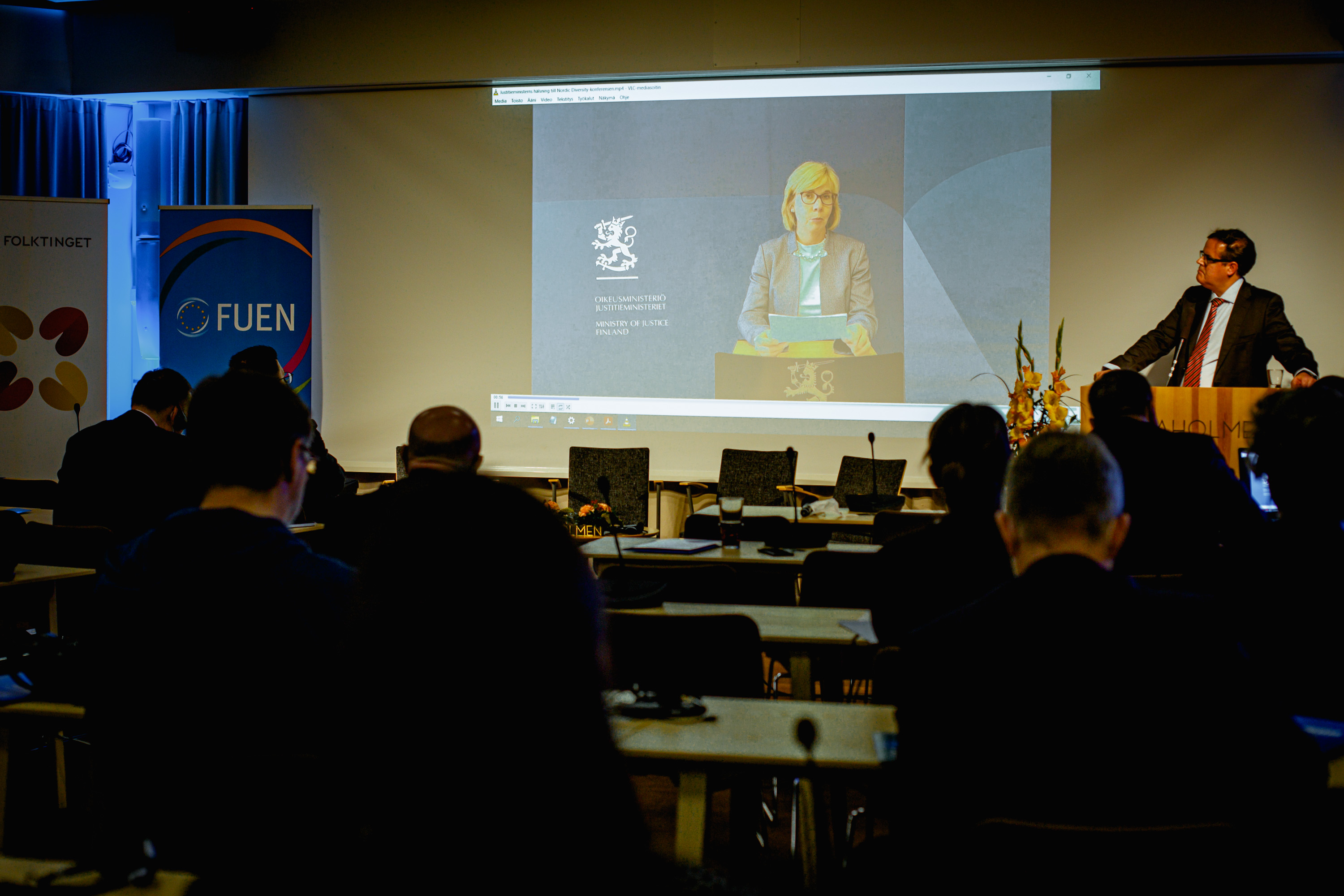 In response to the leading question, Anna-Maja Henriksson, Finnish Minister of Justice, said: "Yes, Nordic diversity is a factor for economic growth," pointing out that the Nordic countries together are an important player in the global economy and that for this reason alone they will continue to increase cooperation. "As far as language rights are concerned, Finland is considered a global role model, but in practice it is not always ideally implemented." That is why a new national language strategy is currently being developed, which will include the right to receive services in one's mother tongue. 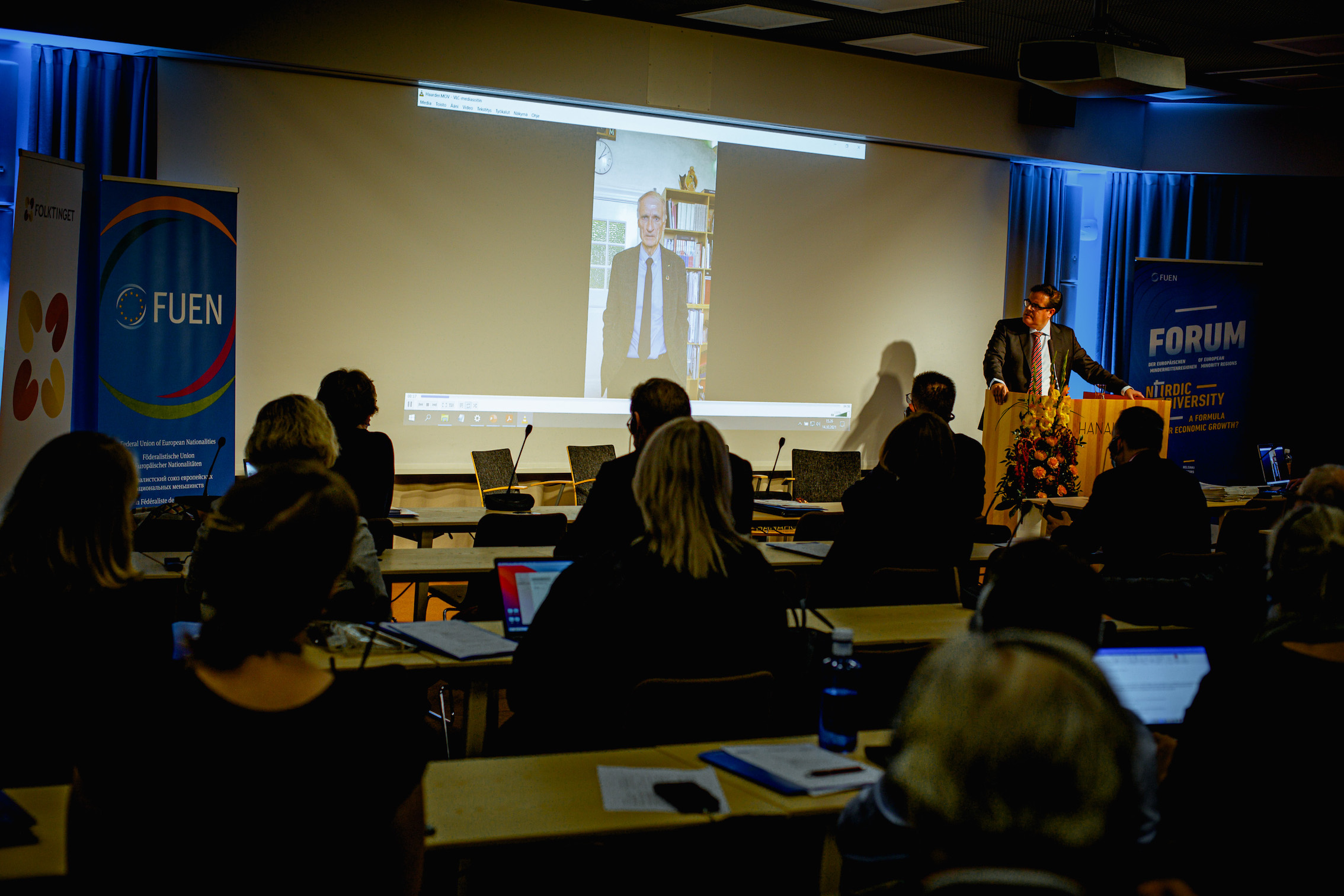 Finally, Bertel Haarder, President of the Nordic Council and Member of the Danish Parliament, emphasised: "Minorities should always be seen as riches and never as a problem." He cited the German-Danish borderland as a successful example of cross-border cooperation.

Background: The "Forum of European Minority Regions" was launched by FUEN (Federal Union of European Nationalities) as a place for cooperation and networking. The aims: to increase the political weight of the individual regions and to achieve a stronger influence on European politics through a united appearance. In addition, the forum offers a space for exchange and analysis of the status quo with regard to minority rights and learning from best-practice examples.

Прочитать больше
FUEN President at the EU Regional Forum: the EU should cooperate with the CoE in developing a framework for minority protection What languages are worth – and how best to learn your neighbour's language