Supporting minorities in their development and their special needs – this is what the Italian politician Gianclaudio Bressa has mastered in an exemplary manner. As a token of appreciation for his tireless efforts and achievements on behalf of autochthonous, national minorities and language groups, he receives the FUEN Prize 2022.

Anyone who grows up in the Bellunese Dolomites, between rough rock faces and with all the challenges that life in the mountains brings, knows what is important: a good coexistence of people – no matter what language they speak or what nationality they belong to. This is what Gianclaudio Bressa has always returned to in his political career.

"Article 6 of the Italian Constitution says: 'The Republk shall protect linguistic minorities through appropriate regulations' - this is what I have done in my time in government, aware that Europe is, as Romano Prodi said, a union of minorities," Bressa said.

"With his actions, Gianclaudio Bressa is an example and role model; as a representative of the majority population, he not only has an open ear, but has also shown through active and concrete action over decades how minorities can be supported in their development," said Daniel Alfreider, FUEN Vice President and, as Deputy Governor of the Autonomous Region of Bolzano-South Tyrol, a good connoisseur of the laureate, in his laudation. Gianclaudio Bressa is a great role model and an example of how state representatives should deal with their minorities.

He had also rendered outstanding services in connection with the strengthening of autonomous regions in Italy: "For him, autonomy is a resource, a way of living together and also a starting point for building an ever better coexistence," said Daniel Alfreider. It is also thanks to his committed work that the autonomous regions, and in particular in the provinces of South Tyrol and Trentino, have initiated a new discussion on the future of autonomy in order to consolidate finances as well.

FUEN has received great help from Gianclaudio Bressa in connection with the Minority SafePack Initiative. During his time as a member of the government in the Italian Parliament, his support for the project in Italy was decisive.

The award winner would have liked to receive his award in person at the FUEN Congress, but had to cancel his participation this week due to an accident and related surgery. As can be seen on the cover photo, which was taken this morning at his home in Rome, he is doing well under the circumstances. On behalf of FUEN, he was presented with floral greetings. 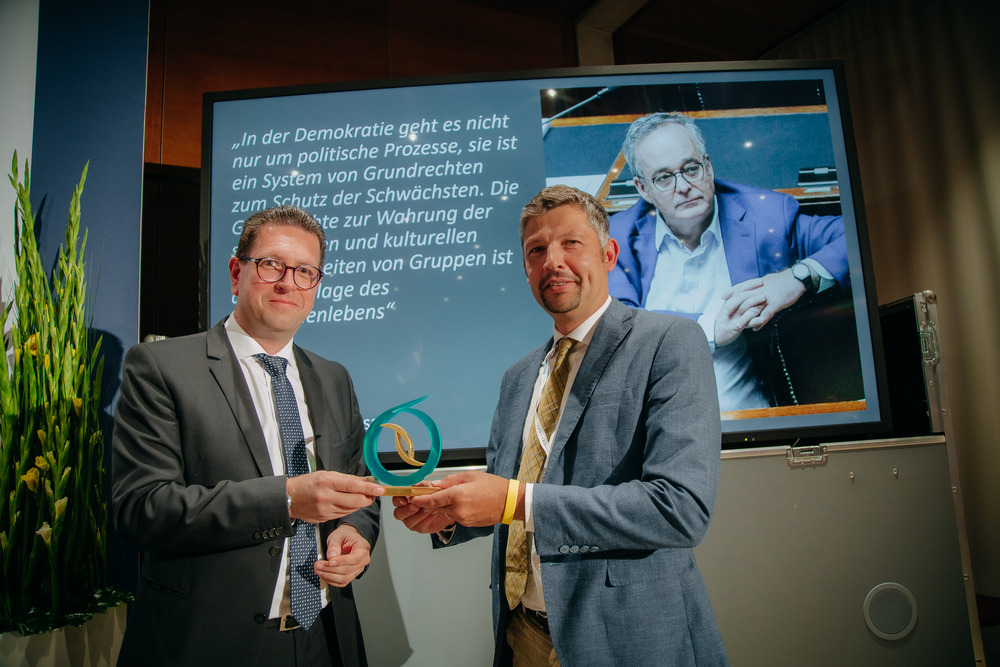 The FUEN Prize is a special honour for people who are actively involved in the protection of minorities and who have worked with commitment and dedication for the improvement and recognition of autochthonous national minorities and language groups in Europe. Launched in 2019, the award has now been formally presented for the third time at the FUEN Congress 2022. The previous winners are Hartmut Koschyk (2019) and Fernand de Varennes (2021).

The art object is entitled "Two Bridges" and symbolises one of FUEN's guiding principles: minorities are bridge builders. The work of art, made of cast resin, gold leaf and wood, was produced by the Flensburg artist Simone Bruhn, who belongs to the Danish minority. It is meant to symbolise peaceful coexistence in Europe and is a sign of the interplay between tradition and modernity.

Прочитать больше
The opening of the FUEN Congress in livestream - be there! Congress opening: FUEN’s work is much needed in hard times like this