Last week, the small community of Croats in Molise, Italy, hosted the 24th Seminar of the Working Group of Slavic Minorities in FUEN (AGSM). Over 30 participants from seven countries, representing nine minority groups took part in the meeting which started on Friday, 1 October with the official opening. Antonio Sammartino, President of the host organisation Foundation Agostina Piccoli said they are very honored that such a small minority was chosen to become host of the event and thanked the participants for taking part in it, thus sending a strong sign of support to the community. FUEN Vice President and Speaker of AGSM Angelika Mlinar welcomed the participants, noting that FUEN support all its members in solidarity, regardless of the size of the community.

The Croats have crossed the Adriatic Sea in the 15th and 16th century and some of them found a new home here, in Molise. Today, a monument depicting a ship reminds people of this. Iva Pavić, Diplomatic Advisor of the Embassy of the Republic of Croatia said that the embassy supported to set up the monument symbolizing the wooden boat, in the roundabout between the Croatian villages of Montemitro / Mundimitar, Tavenna / Tavela and San Felice / Filič. She also presented how Croatia supports the community. Milan Bošnjak from the State Office of the Republic of Croatia for Croats Abroad talked about the ways in which Croatia supports the preservation of the language in this area. Since the minority is not officially recognised, they can not learn the language in schools, and therefore Croatia is sending and funding a teacher of Croatian language for Saturday and afternoon school. He expressed his wishes that Italy would support the Croatian minority in Molise to the same extent as Croatia supports the Italian community in Croatia.

A very lively panel discussion on the challenges of the Molise Croatian community followed the opening speeches. Tamara Isler, School Director of the district explained that there is no Croatian language in the official curriculum since the minority language is not recognised. Another problem is that the villages have a diminishing population and there are not enough children. According to the law, a village has to have at least 600 inhabitants to have a school, and in the villages of Montemitro, Kruč and Tavela the schools were already closed because of this. According to her, the Italian system should have more flexibility to allow smaller schools to remain open, and it should also include the Croatian language in the curriculum. 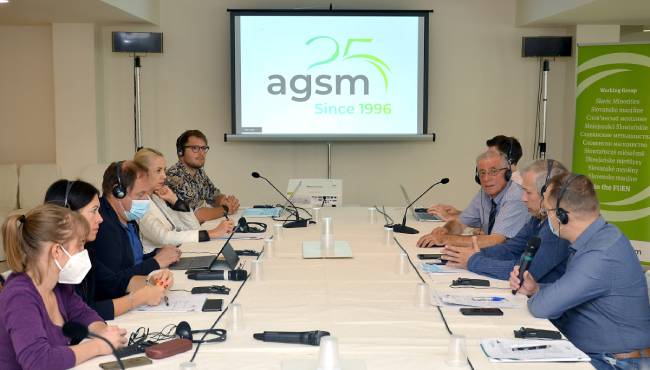 Sergio Sammartino, Mayor of Montemitro / Mundimitar, Franceso Trolio, Mayor of Acquaviva Collecroce / Kruč and Paolo Cirull, Mayor of Tavenna / Tavela also took part in the panel. The mayors stated that it is very challenging to lead such small municipalities since there are many infrastructural challenges, including in the school and healthcare systems. They agreed on the need for more strategies to be implemented towards sustainability and local economy to create added value and to make young people stay in those communities. AGSM participants from abroad, such as the representatives of Sorbs in Germany, Slovenes in Italy and Russians in Estonia also shared their experiences with similar situations.

On Friday afternoon the participants of the seminar visited the city of Montemitro / Mundimitar, the exhibition of the Croatian minority and the archaeological sites at the church of St. Lucy / Sv. Luca and held a debate with the Mayor about the municipality and its bilingual signs.

On Saturday, 2 October, a productive meeting of AGSM took place, in which the participants discussed the current situation of the minorities they represent, focusing on the COVID situation and the changes it brought. In general, the communities had more digital projects, even digital theater, concerts, and readings. Many faced challenges to keep the communities together because no physical meetings were allowed, and the older generation was not always able to join the online community activities. The debate from Friday about the Croatian community turned into concrete action proposals. At the proposal of Angelika Mlinar, FUEN Vice President and AGSM Speaker the participants agreed to draft an AGSM resolution which will urge the recognition of Molise Croats. They also discussed to invite the delegation of the Council of Europe’s Framework Convention for the Protection of National Minorities, which is scheduled to go to Italy this year to visit the Molise Croats.